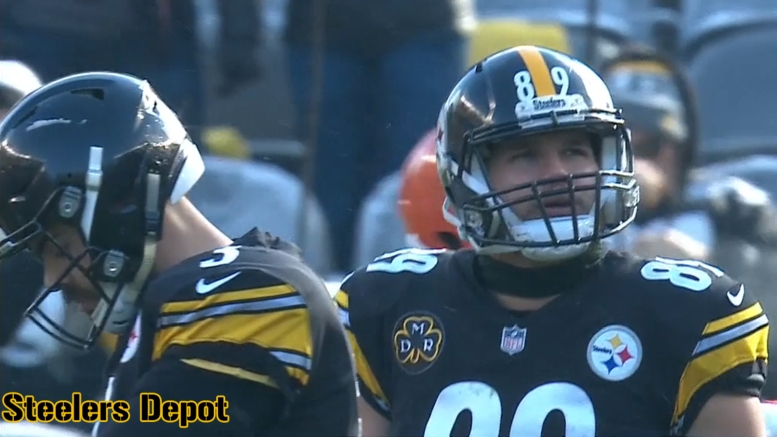 The Pittsburgh Steelers have not gotten what they were looking for out of Vance McDonald when they traded for the tight end just before the start of the regular season. Part of that was the time it took to get in integrated into the offense, but the lion’s share of the blame goes to his repeated injuries and corresponding inability to stay on the field.

But when he has been on the field, especially in the second half of the season, he has been a positive contributor, both on the receiving and blocking end. He is easily the team’s best blocking tight end by a good margin, and his health in the postseason is an underrated storyline, in my opinion, because it really opens up what they are able to go.

He was on the field for the Steelers’ season finale, even if they gave him some time off as the game wore on. Somewhat amusingly, though he had a Jesse James-style ‘just enough’ block on James Burgess here on this 16-yard run for Stevan Ridley on the Steelers’ opening drive against the Browns.

Later in the first quarter, working on the outside left with Jerald Hawkins and Roosevelt Nix from 22 personnel, McDonald was tasked with sealing the edge against Myles Garrett. An initial false step right helped draw the end inside and the tight end kept him there. A key pull block from Matt Feiler set up a 21-yard gain.

A few players later in the same drive, he was targeted on the first of two passes for the game, an incompletion thrown from Landry Jones. Working out of the left slot at the cusp of the red zone on second and 14, McDonald worked a corner route before breaking back inside, but the ball was delivered high off of his fingertips.

In the middle of the second quarter, with the Steelers facing first and goal from the four-yard line, the offense checked into their rarely-used 13 package, all three tight ends aligned to the right—including Hawkins. As the end man on a run up the middle McDonald’s block was not crucial to the outcome of the play, but well-done all the same. And you never know when a run might bounce in your direction.

On a running play late in the game, on first and 10, the Steelers turned to their staple counter trey. Jesse James was used alone with Feiler as the pullers, but McDonald’s seal of Burgess on the second level helped the play go. If Fitzgerald Toussaint had followed to the outside, perhaps there would have been more to gain.

In truth, the biggest highlight for the tight end from this game is that he walked out of it without any injuries. He has spent far too much time on the sidelines with a cornucopia of physical ailments, but has been healthy for the past two games, which is a minor accomplishment, all things considered.