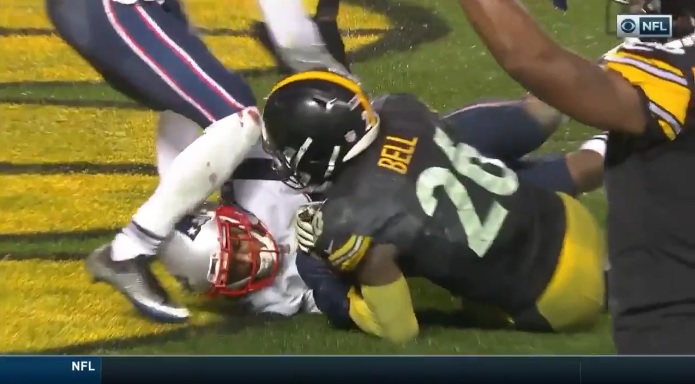 I just need to let you know my heart isn’t in this at all. Your Steelers and Patriots winners/losers.

Vince Williams: Williams answered the call. Probably the best linebacker on the field vs the run tonight. And the first interception of Tom Brady for the first time since 2005. Steady, the tone setter, you have to love and respect what he’s done in his career.

Le’Veon Bell: Workhorse. That’s all you need to say. He did it all and ran hard every snap against a depleted Patriots’ front. And he was an asset out of the backfield, even more critical with no Antonio Brown, as he’s been for the past month. 165 yards of total offense.

Martavis Bryant: Fans have been waiting, maybe screaming is the more apt word, for Bryant to have a big game. He did. Two sensational catches, a 39 yard diving play down the right sideline and a one-handed four yard TD with his left hand being yanked down. Hopefully more of that in the future.

Chris Hubbard: There may have been some issues in pass protection but Hubbard was a big key to the Steelers’ perimeter run game working as well as it did. Made some DBs pay for trying to attack in space. He continues to play above the line.

JuJu Smith-Schuster: Tough as nails, he, like Hubbard, played a big role in the run game. And of course, his 69 yard catch and run was a thing of beauty. Too bad it didn’t go the way it was supposed to.

Ryan Shazier: Because at the end of the day, Shazier is a reminder that football isn’t the most important thing in the world. The best news of the day, even if the Steelers would’ve pulled off the win, was seeing 50 in the press box, smiling and seemingly good mobility. Here’s to even better days for him.

Sean Davis: To be fair, it’s impossible for any one guy to shut Rob Gronkowski down. Keith Butler did him no favors on the final drive. But there’s no denying he was the guy the Patriots whooped on. And whoop on they did. Davis doesn’t have any of that happen to him if he picks off the deflection early in the drive. So frustrating.

Alejandro Villanueva: Villanueva was called for two penalties that negated a promising drive. The hold was questionable but still stung and even in pass pro, he didn’t look the best.

Sean Spence: Spence at first watch-through, just looked awful. Swallowed up versus the run, a non-factor (though this was predictable) against the pass. Dion Lewis averaged 5.2 yards per carry.

Run Defense: To bounce off that, in general, I thought the Steelers’ run defense gave up too many chunk plays. Not enough guys getting off blocks or rallying to the football. It wasn’t even that tackling was bad, it actually looked pretty good. Guys just weren’t in position. Too many 2nd and long runs that turned into 3rd and short/manageable.

Final Drive Playcalling: Wow, Keith Butler is going to be thinking about this one for a long time. I don’t know what the plan was on the final drive. But the Steelers had no answer for Gronk, the only player to catch a pass the entire series. They have never figured out a way to even slow him down.