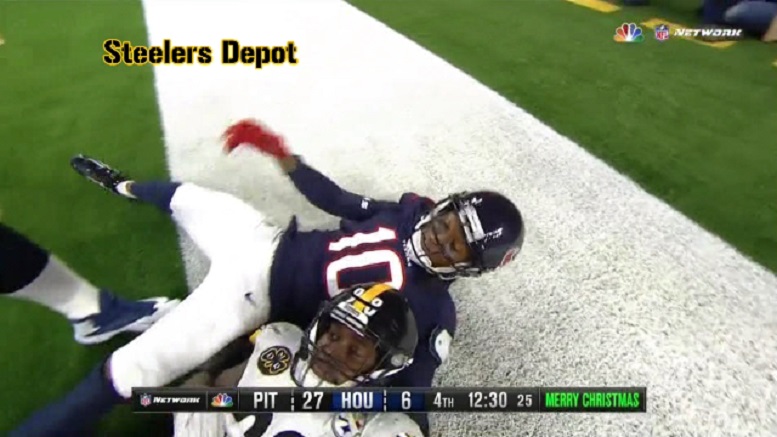 While Pittsburgh Steelers linebacker Vince Williams was penalized this past Monday for laying down on the ground beside Houston Texans wide receiver DeAndre Hopkins after failed two-point conversion pass attempt the league reportedly decided not to fine him for his actions, according to Ray Fittipaldo of the Pittsburgh-Post Gazette.

JaDaveon Clowney and Julien Davenport fined $9,115 for face mask penalties vs Roethlisberger and Watt. Vince Williams not fined for taunt

Williams’ playful act in the end zone in the fourth quarter of Monday’s game happened after a two-point conversion pass attempt from Texans quarterback T.J. Yates to Hopkins fell incomplete. While Hopkins was laying flat on his back after failing to catch the throw from Yates, Williams rushed in and nestled himself alongside the Texans star wide receiver before he was quickly pushed away. A flag was immediately thrown and the Steelers were penalized 15 yards on the ensuing kickoff.

Several players around the league have been fined this season following them receiving taunting penalizes during games so Williams should probably consider himself lucky that he didn’t lose some of his weekly game check for his Monday actions.

Williams, by the way, took responsibility for his seemingly poor decision on Twitter after the game was over.

I wanna be known for my play and not my antics. Gotta grow up

As previously reported, Texans outside linebacker Jadevon Clowney was fined earlier this week for his face mask penalty on Steelers quarterback Ben Roethlisberger during Monday’s game. Additionally, we now know that Texans tackle Julie’n Davenport was also fined $9,115 this past week for his Monday face mask penalty that he incurred during the second quarter of the contest.