The Pittsburgh Steelers will play their Week 15 game at home Sunday afternoon against the New England Patriots and another win will result in them securing a first-round bye in the playoffs and potentially even home field advantage throughout the playoffs. There are quite a few other entertaining games taking place on Sunday, however, so with that, here is your fan rooting interest guide for Week 15 in addition to the AFC seeding picture entering today’s games.

If you believe that the Steelers can beat the New England Patriots Sunday afternoon then it might behoove those fans of the team to root for the Jaguars to beat the Texans during the early round of Sunday games. Sure, the Steelers can clinch home field advantage throughout the playoffs on Sunday with a win over the Patriots combined with a Jaguars loss or tie, but if you would like to see the Patriots have to play an extra postseason game, then Jacksonville needs to end up with a first-round bye. Obviously, if you think the Steelers might lose to the Patriots Sunday afternoon then go ahead and pull for the Texans to upset the Jaguars.

While the Ravens only chance at making the playoffs this year is as a Wild Card team, their path to that isn’t very difficult on the surface. Sure, they start Week 15 as the No. 7 seed in the AFC, but their remaining two games after Sunday’s contest against the winless Browns appear to be easy ones. The Ravens got some help on Saturday when the Kansas City Chiefs beat the Los Angeles Chargers and with the Buffalo Bills and Tennessee Titans still having tough games ahead of them to close out the regular seasons, Baltimore’s essentially in the driver’s seat even though they dont technically control their own destiny. It would be very entertaining to see the Browns get their first win of 2017 against the Ravens on Sunday in Cleveland. 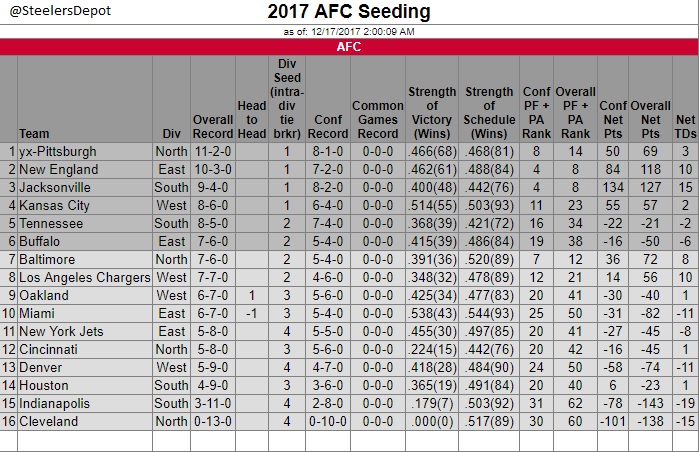