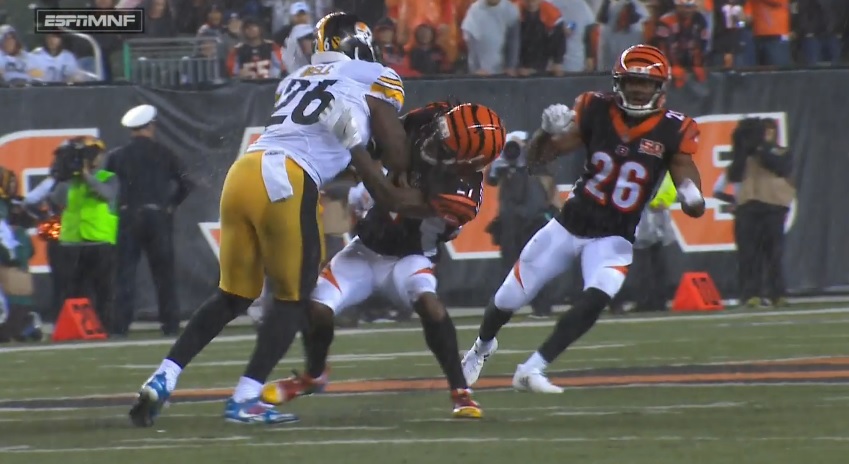 I’m not sure how much interest there is on a night like this. But a weird game, weird win. Weird stats comin’ at ya.

– Ben Roethlisberger quietly hit the 50,000 career passing yards mark. 8th to do it in NFL history.

– Chris Boswell is just one of three kickers over the last three years to kick both an end-of-half and end-of-game field goal. Chandler Catanzaro (2016) and Justin Tucker (2015) are the others.

More on Boswell. His career against the Bengals? A perfect 20/20.

– Like Boswell, Le’Veon Bell is just one of three running backs to rush for 75 yards and catch for another 100 and a receiving TD in a game since 2012. Alvin Kamara did it last week and Reggie Bush in 2013.

– Matthew Marczi covered this one pretty well but Vince Williams’ 7 sacks is the most by any Steelers’ off-ball LB since Kendrell Bell’s rookie season, when he finished with nine.

– Martavis Bryant’s kick return TD that was called back would’ve been the first such play for the Steelers since 2010, when Antonio Brown took a reverse to the house.

– Le’Veon Bell is on pace for 88 receptions this season. That’d be a career high and the second most by a RB since 2012. First place is still likely safe…Matt Forte caught 102 balls in 2014.

– Since the merger, the only team to have more penalty yards against the Steelers than the Bengals’ 173 tonight is the Cleveland Browns’ 188 in 2015. Steelers won that game 30-9.

– Last one. Team stat. The Steelers have won back-to-back games despite losing the turnover margin in each. -1 tonight, -3 against the Packers.

That hasn’t happened since Weeks 16-17 in 2011, when the Steelers beat the St. Louis Rams and Cleveland Browns. -1 in each of those victories.