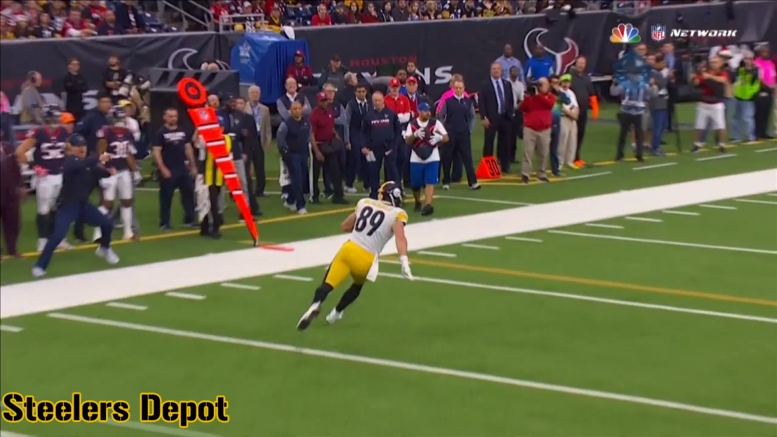 Man, it sure is nice when the Pittsburgh Steelers have Vance McDonald on the field. The problem, of course, has been the fact that he has so rarely been on the field this season. During his first year with the team, the fifth-year tight end has missed six games due to four separate injuries, and has left three of the nine games in which he has played due to injury.

Through an early-season spell in which he was still not being used much—unsurprising given that he was still very new to the offense, having only recently been acquired via trade—McDonald has become a productive player both as a blocker and a receiver when he has been on the field.

Those statistics have been split evenly between the past two games, with four receptions for 52 yards in each. And the Steelers used him early on Monday against the Texans. On the second play of the game, Ben Roethlisberger found McDonald as his third or fourth option on the play, coming back to the ball and making himself available exactly the way a tight end safety valve ought to.

The pair hooked up again on the very next play, with the Steelers coming out of a similar set from the previous. The important part is Le’Veon Bell flanked out wide. It’s not visible from the end-zone angle of the first play, but see here how Bell’s in-breaking route opened up the sideline for McDonald’s second catch. Of course, he used his speed and athleticism to get more than was naturally there for him as well, going for 20 yards.

Of course he’s more than just a receiver. Later on the drive, McDonald provided a seal block on a pull to help open a lane for an 11-yard run up the middle by Bell. It doesn’t actually look like much, but the pick of Brian Cushing—and the safety missing his gap—set up what happened here.

Later in the quarter, the tight end racked up yet another reception, picking up chunks of yardage. This was a simple corner route exploiting zone coverage, but his quickness to his spot gets him there. It’s the reason he is averaging 14.1 yards per reception. He is averaging 1.78 yards per route run, the seventh-most among tight ends with at least 100 snaps in route.

But his value will always be as a dual threat, and his athleticism combined with his strength is quite valued in the blocking game. His ability to get all the way down the field following an initial misdirection and get out in front of an end-around for Martavis Bryant is, quite frankly, something that separates him from Jesse James.

But until he shows he can stay on the field…well, that’s a topic for another day. Currently, he is healthy, and hopefully securely placed inside of plate mail to protect him from harm. McDonald can be a big asset when he is on the field. He just needs to be on the field enough to be an asset.