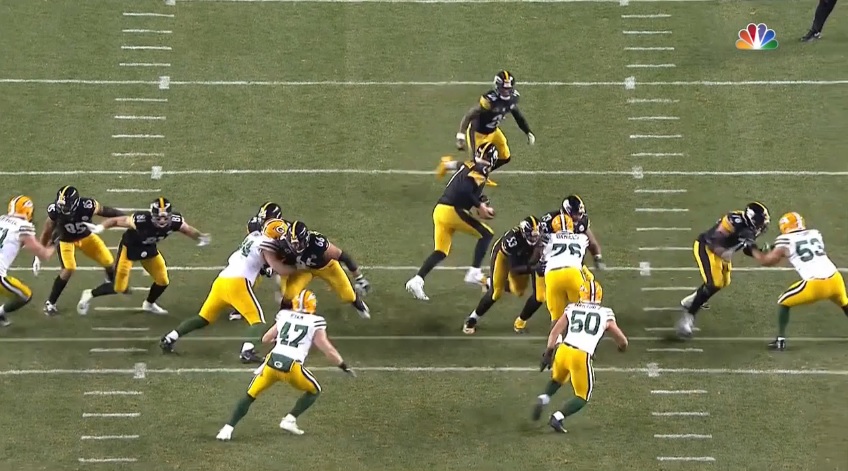 The Pittsburgh Steelers’ offensive line did work Sunday night. They ran the ball to some of their greatest success of the season and Ben Roethlisberger, sacked just once (and it was his fault), was otherwise brilliant. That success the Steelers had centered around controlling one man – DE Mike Daniels. He was their version of Cam Heyward, though not quite as talented, but still a force in the run and pass game.

Gotta give credit to the Steelers’ interior line. Ramon Foster, Maurkice Pouncey, and David DeCastro. We’ll look at all three today in their ability to control Daniels, control the line of scrimmage, and control the game. We’re going to look at a couple of those clips today.

First one is DeCastro in pass protection. One-on-one as the line does a half-slide to its left, which means man-to-man to the right. Good first two steps, square to the block, tight hands, and able to re-engage and punch when Daniels tries to shed. Clean pocket for Roethlisberger to make the throw.

Next is a run block. Nothing spectacular but the double-team has to be strong on these lead runs. Good job by DeCastro and Chris Hubbard to attack half-man and secure Daniels. Daniels sheds late but the block does its job. Unfortunately, Alejandro Villanueva and Jerald Hawkins get their butts whooped on this play.

Another run block. Initial double-team with DeCastro getting a good chip on Daniels. Helps Pouncey secure it and he drives his feet to finish it. Daniels sorta gets in on the tackle, he’s officially recorded with it, but it’s a solid gain and rep by those two.

But here’s my favorite run block on Daniels. Ramon Foster gets the credit for this one. Initial double-team as part of this combo block. Foster secures it and overtakes. Daniels looks to duck inside but Bell bounds out. Foster sets his hips, seals him, and wins the block. Big gain for Bell off Foster’s outside hip.

And my favorite pass pro rep. This comes from DeCastro. Daniels tries to hit him with an inside spin (it’s again man-to-man with the line sliding away). DeCastro mirrors with ease and stuffs him the rest of the way. Roethlisberger complete to Eli Rogers on third down.

Credit to the offensive line. As usual, they’re the catalyst for what got the offense going. That starts with stopping the Packers best guy, which this front five did a tremendous job Sunday night.