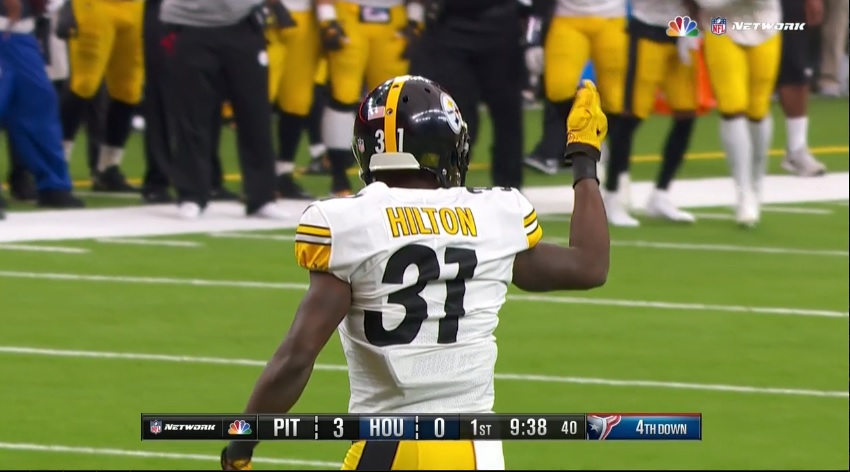 Mike Hilton became the first DB to record three sacks in a game since November of 2005. That was when Hilton was eleven years old. So yeah, last night was pretty special. But how those sacks came about are just Keith Butler blitz staples this whole year. And sending #31 from the slot certainly isn’t new either; no corner blitzes more than him. But it was incredibly effective and the Houston Texans had no answer. Let’s take a look.

One of Butler’s new blitzes is something you won’t find in the Dick LeBeau playbook so we don’t have a good name for it like the other ones (Storm, Frisco, Fire X). But we’ve identified it before. A dual DB blitz with the backside safety and nickel corner converging on the QB. Here it is earlier in the year against the Indianapolis Colts. This one forces an incompletion.

And here it is twice Monday afternoon. In the first clip, Hilton does a nice job winning the one-on-one matchup with the back, getting enough of T.J. Yates to drag him down.

Later on, the scheme wins. Six man protection versus just a five man rush but the uncovered RT and back slide the same way to pick up Sean Davis. Hilton is free from the blindside.

The other was more old-school. A plain nickel blitz that the Texans never picked up. Hilton finished it off. Four man pressure, though in this case, out of their nickel personnel, the awayside OLB isn’t dropping. Instead, it’s just the dime linebacker L.J. Fort.

Hilton and T.J. Watt race each other to the QB. Hilton wins.

Scheme has a lot to do with it, sure, but Hilton also possesses a natural ability to time his blitzes and fool offenses into not knowing when he’s blitzing/playing in coverage. Keith Butler has praised that ability and it’s why he keeps trusting him to get after the QB. Monday made him a very happy man.