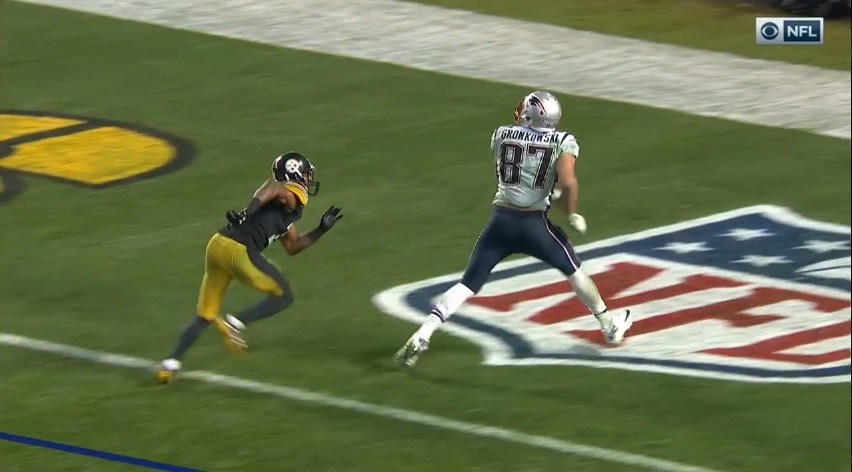 Listen to the opening beat of Bell Div Davoe’s hit song That Girl Is Poison and you instantly know what you’re about to jam too. You know the one, right? da da dada da dadadada baa! I heard it Saturday and during Sunday’s loss to New England, it played through my head again. Rob Gronkowski was poison for the Pittsburgh Steelers‘ secondary.

Like I wrote in Stats Of The Weird, Gronkowski is averaging six catches, well over 100 yards, and a touchdown a game in six meetings with the Steelers. Sunday, he set a career high in yards and tied a high in catches while dominating on the go-ahead Patriots’ touchdown drive.

As usual, Keith Butler and company had no answer to even slow him down or give the illusion that they were. We don’t have the All-22 left but we’re going to break down some of those big plays and what the Steelers *tried* to do to stop him.

Let’s start with a 4th and one slant route Gronkowski caught. Tough assignment for Artie Burns who gets left on him because of the Patriots formation. Gronk iso to the backside where Burns almost always lines up. So the Steelers don’t bother trying to swap assignments and get Burns over someone in the slot.

For Burns, two routes you gotta expect. Fade and slant.

Gronk runs the slant, getting inside leverage off the line. All Burns can do is trail. He actually plays the pocket and contests the throw well but when you’re dealing with a 260 pound TE, you’re not the stronger man in the battle. Gronk hangs on and converts. 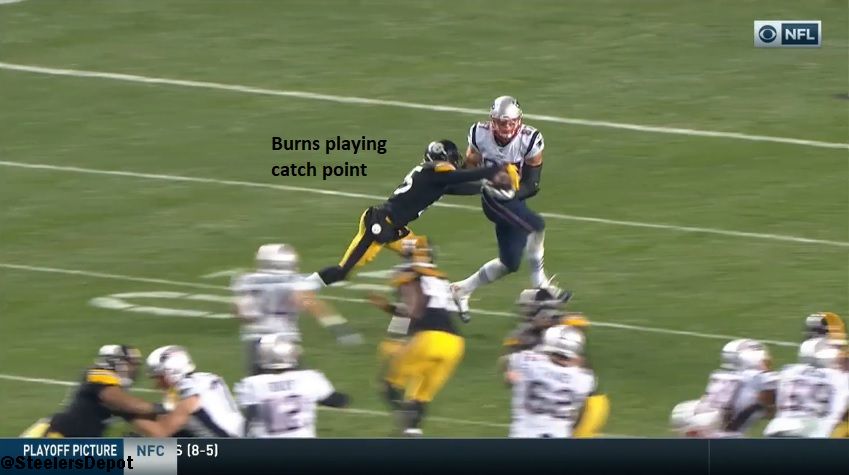 Now to the final drive. Last play before the two minute warning. Patriots in an empty set. We haven’t begun to get into charting but a lot of mixing and matching here. Looks like New England is in 11 personnel and Pittsburgh responds with a 3-2-6 dime defense. All three DL are in the game, one OLB (Dupree) and one ILB (Fort). William Gay the dime defender, lined up as if he’s the SS with Sean Davis over Gronk in the slot. 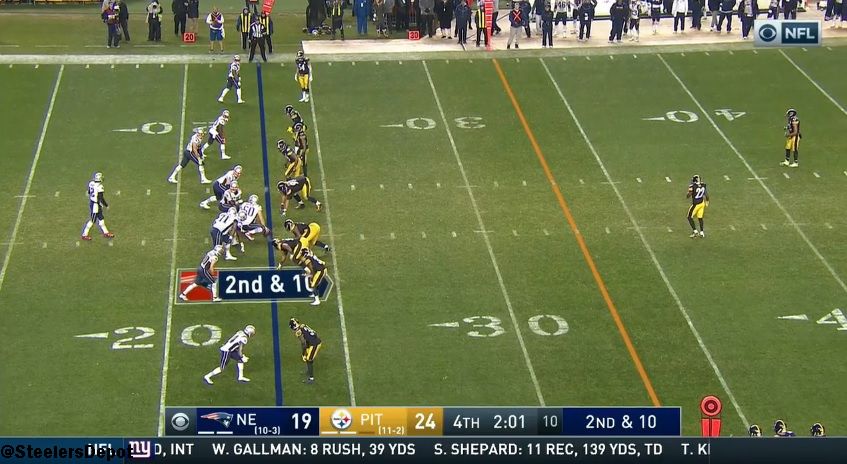 Appears to be a Cover 1 Robber. Man-free coverage with Gay being the robber, reading the QBs eyes and Mike Mitchell the single high safety. Gronk runs a good route, stemming to the outside in order to get Davis to bite and then uses a swim move to beat him in coverage. 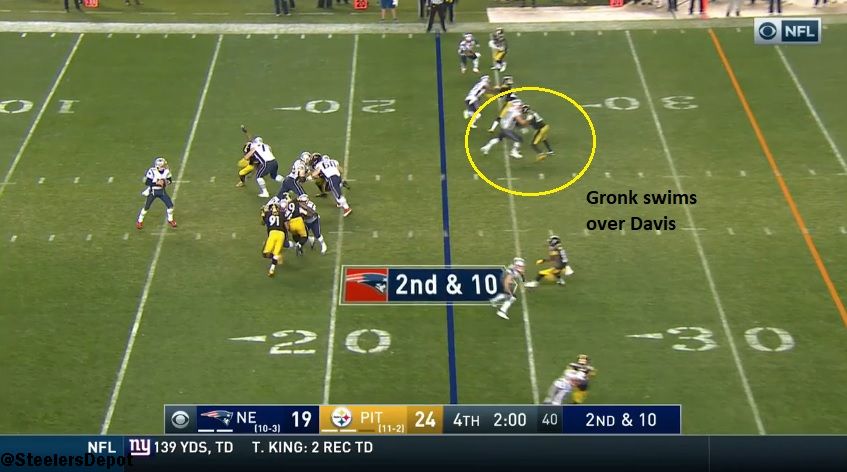 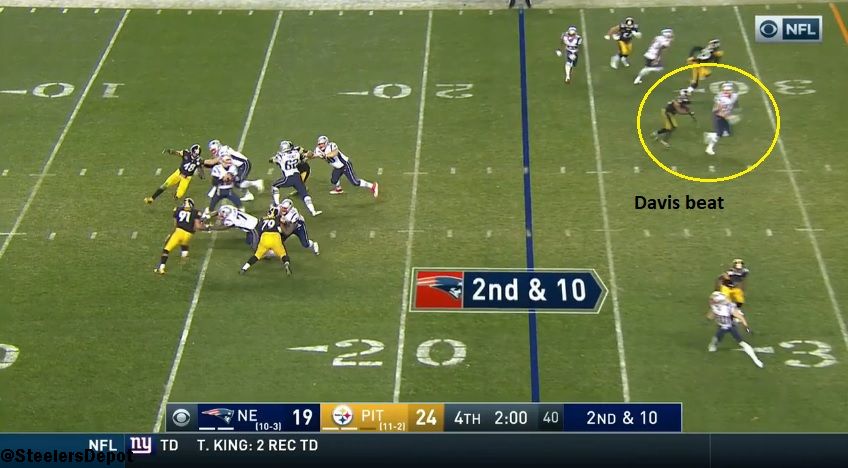 The pass rush doesn’t get there, Brady does a nice job of climbing the pocket, and hits Gronk over the middle. Mitchell, sinking on everything vertical, isn’t able to close in time.

The next play. Single high again with Mitchell shading to the defense’s left, away from Gronk, who is again lined up in the slot. Nickel blitz with Mike Hilton, who rolled up on Gronk, coming from the edge and Davis buzzing down to replace him. It’s a three-deep, zone pressure. 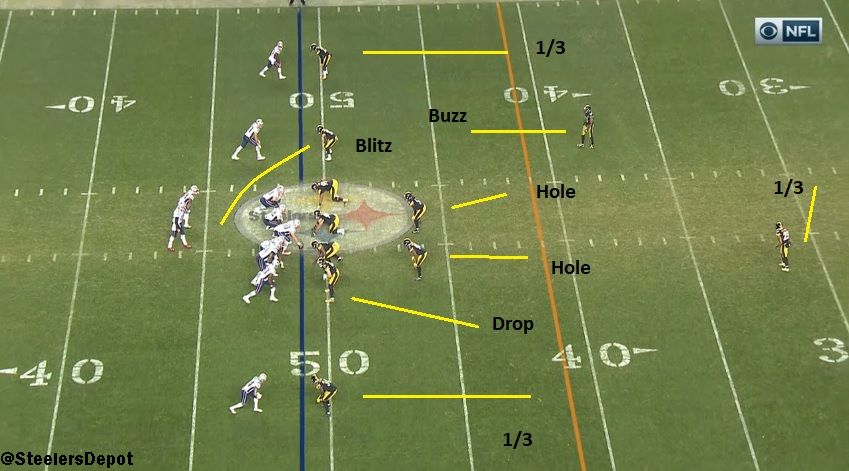 Davis sits outside leverage on Gronk so he stems his route to the inside. Sean Spence is trying to play the sticks but also doesn’t get enough depth to squeeze the throw and again Mitchell, based on depth and alignment, can’t close on the ball except to make the tackle.

And finally, the two-point conversion which proved to be a pivotal play. Gronk split out Iso on Davis this time, not Burns (who is working on the other side, his usual LCB spot). Gronk, like he did before, stems to attack Davis half man. Davis tries to press and attempts to stay square but is shuffling his feet inside based off the initial release. His hands are too high, there’s no power, and Gronk swaps hips as soon as he gets vertical. 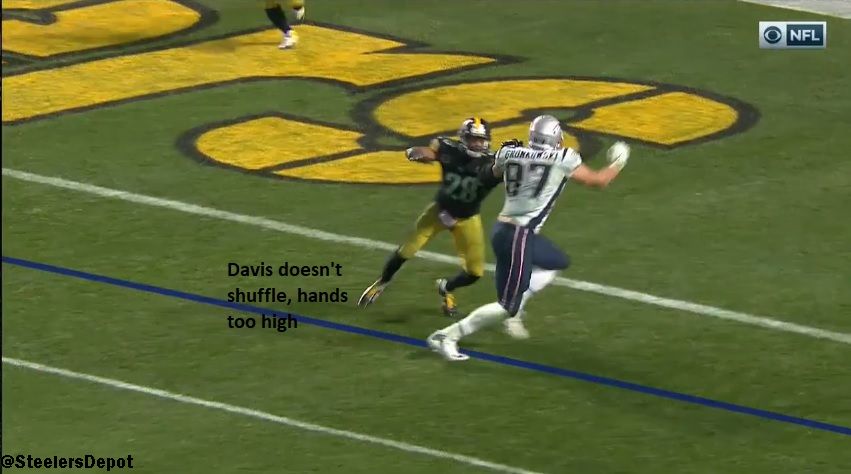 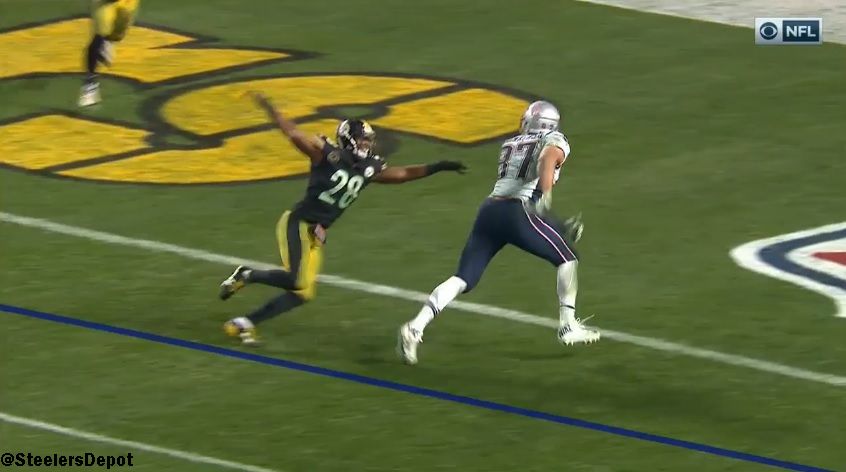 Davis is flailing and trailing. Easy catch for Gronkowski, who high points the football and converts.

So what can we conclude? Obviously, Gronk is an elite player and it’s hard to bash Davis and Burns too much for not being up to task but clearly, Davis especially, didn’t play with great technique.

Bracketing is a logical next step and yeah, the Steelers probably didn’t do enough of that. But they didn’t run Cover 2, they were trying to get a safety underneath and have the single high safety discourage the middle of field throw. But when the Patriots go empty and spread you horizontally the way they do, it is hard to bracket. And if you try. you’ll identify it immediately. Hard to hide anything in empty.

But the Steelers didn’t do a good job taking away the middle of the field. Mitchell had too much depth to truly take away any in-breaking routes and the Steelers often leveraged themselves to take away the outside. There is no good side to take away but the outside at least cuts down on the space he has to work, forces a more difficult throw, and limits the chance for YAC.

Once the coaches film comes out, we’ll get a better chance to revisit the topic. But if the Steelers see the Patriots again, they gotta come up with a better plan.

Because when it comes to Gronk, that boy is poooooision….