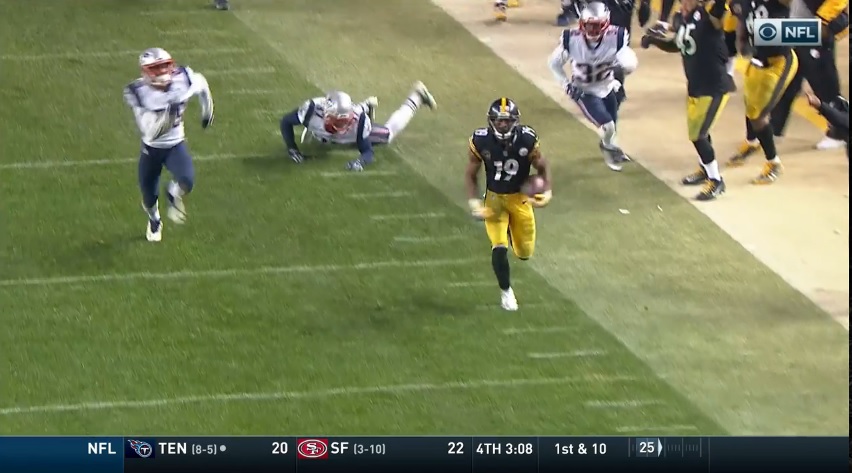 Weird. In the worst kind of way.

Heyward is a full sack away from surpassing Lawrence Timmons and Kevin Greene’s career totals, which would put Heyward 8th all-time in franchise history. He’ll have a ways to go in order to reach 7th place though. Aaron Smith sits there with 44.

– Le’Veon Bell with 29 touches today, 24 rushing, five receiving. He may not play Week 17 but he also definitely might too. He is up to 397 touches this season, putting him on pace for 453. That’d be the most by a player since Larry Johnson’s 457 in 2006. Should Bell finish with more than that, he’ll have the second most in NFL history, trailing only James Wilder’s 492 in 1984.

– The next yard JuJu Smith-Schuster earns receiving will give him 700 on the season. He’ll join a club of only five other Steeler rookie wideouts. He’s likely to finish with the third most yards by the end of the season. He’ll need 58 to do just that.

– Eli Rogers caught his first TD pass in 364 days. Previous one was December 18th, 2016 against the Cincinnati Bengals.

– Vince Williams picked off his first NFL pass, breaking a 12 year drought against Tom Brady. It was only the second of his college or pro career. The only other came in 2011 when he was a junior at Florida State. On that day, he picked off Mike Glennon.

– Brace yourselves for this one.

His 168 receptions are a career high against the Steelers and the nine catches tie it.

– Totally random, dumb stat. The Patriots squared 11 4th quarter points to win. Since the merger, it’s only the second time an offense put up exactly 11 points against the Steelers. Today and 2004 versus Oakland (where the Steelers still won). It’s only the fourth time a team put up exactly 11 in any quarter. Baltimore’s down it in the third quarter twice, Oakland, and now New England.

– The Steelers have been excellent on third down the last two weeks. 12-18 against the Ravens, 10-16 against the Pats. Combined, that’s converting 64.7% of the time.

Of course, the one third down they really needed to convert tonight, they didn’t…

– Last one. I’m not trying to rabble rouse about the refs but the Patriots had four penalty yards today. The last time a Steelers’ opponent had so few? Jacksonville in 2002, who weren’t called for a single penalty that game (and still lost 25-23).

Since the merger, it’s only happened three other times. Miami in ’93, Seattle in ’87, and Cleveland in ’79. The Steelers won all those games. Not today.