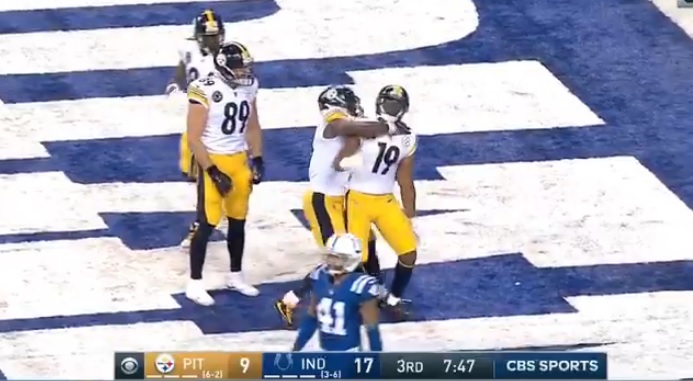 Bit of fun in today’s Pittsburgh Steelers‘ win that got lost in how ugly the game looked. After scoring his 5th touchdown of the season, JuJu Smith-Schuster and Le’Veon Bell had a little fun with the celebration. The two reenacted A.J. Green’s chokeslam on Jalen Ramsey that got him tossed a week ago. Check it out.

Smith-Schuster joked about it on Twitter after the game.

Bell confirmed that’s what it was after the game, per ESPN’s Jeremy Fowler.

“Le’Veon Bell said his touchdown celebration with JuJu Smith-Schuster was a re-enactment of A.J. Green choking Jalen Ramsey. ‘We just freak it,’ said Bell of his routines with JuJu. How will A.J. take it? ‘I don’t know. I guess we’ll see,” he said.”

That touchdown began the Steelers comeback to beat the Colts 20-17. Smith-Schuster has led the Steelers in receiving over the last two weeks, hauling in 12 catches for 290 yards and a pair of scores. He made the big plays against the Detroit Lions and then made the tough ones today, coming up big on third down.

If he keeps scoring, the Steelers’ offense will stay afloat. And he’ll keep on celebrating.