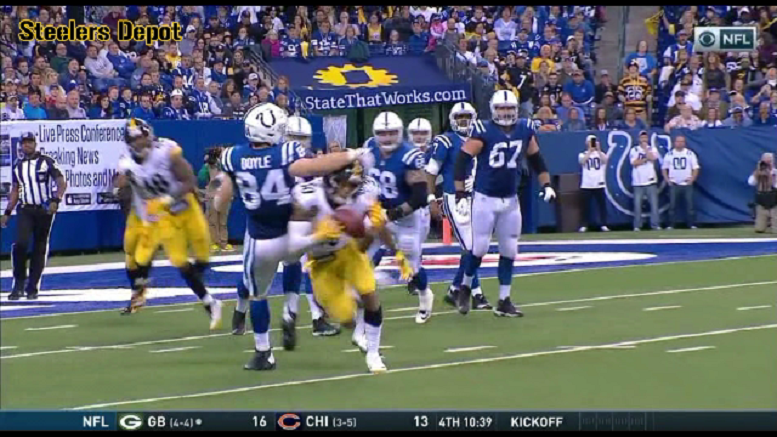 The Pittsburgh Steelers offense struggled once again Sunday and found themselves in that all-too familiar situation of being in a close game late against an inferior opponent. The Steelers came into the game as a 10-point favorite against the 3-6 Indianapolis Colts, led by backup quarterback Jacboy Brissett.  The Steelers offense was basically non-existent for the first half as they were only able to manage a field goal in the final minute of play to trail the Colts by a score of 10-3.

Fast forward to the fourth quarter, the Steelers trailed the Colts 17-9 after Brissett hit wide receiver Chester Rogers for a 61 yard touchdown which was followed up by a 7-yard touchdown catch by Steelers wide receiver JuJu Smith-Schuster. The Steelers offense was still struggling to move the ball consistently and the defense had tightened up since the early second half explosive play touchdown to Rogers.  Somebody had to make a play to change the course of the game, and that person happened to be linebacker Ryan Shazier. With 13 minutes remaining in the game the Colts were deep in their own territory and attempted a screen pass to tight end Jack Doyle that would be intercepted by Shazier.

The play call didn’t seem to be a bad one as there was plenty of open field around Doyle giving him the opportunity to gain the 8 yards for a first down as the Steelers brought pressure, including a blitzing Shazier.  Shazier made an outstanding play realizing that Doyle was attempting to slip out into the flat.  He was able to stop his momentum mid pass-rush and change directions so he could make a play on the receiver.   The ball was tipped off of Doyles hands and landed right into Shazier’s.   The Steelers got the ball on the 10 yard line and were able to tie the game a couple plays later as Ben Roethlisberger found a wide open Vance Mcdonald for a 7 yard touchdown and that was followed up by a successful 2-point conversion pass to Martavis Bryant.  The game had now turned in the Steelers favor and all momentum that the Colts had was now gone.

Shazier is widely considered one of the best linebackers in the league as his freakish athleticism can sometimes take over a game.  There are also times where it can hurt the team as he over-plays his position and sometimes takes himself out of the play.  Just earlier in this game he shot a gap and over-ran a tackle which would have resulted in a 5 yard loss.  Instead Colts running back Marlon Mack was able to secure a 9 yard run and Steelers media and fans flocked to Twitter with their “not again Shazier” comments.  There are going to be times that Shazier make us all scratch our heads and just wish he was more cautious, but there are also going to be times where his aggressive play style will win a game for the team.