The Pittsburgh Steelers are on their bye this week and that means we all can sit back and watch the other action around the league in Week 9 in order to see if the No. 1 seed in the AFC can stretch that lead in the conference as well as their own division.

If you are a Steelers fan that’s doing a little bit of scoreboard watching over the course of Sunday and into Monday night, here is your fan rooting interest guide for Week 9 in addition to the AFC seeding picture entering today’s games.

The 4-4 Ravens will be looking to remain relevant in the AFC in Week 9. The Ravens are coming off a mini bye of sorts as their last game was Thursday night in Week 8. Even so, Ravens quarterback Joe Flacco will be looking to bounce back from a concussion Sunday afternoon against the Titans. The Ravens defense is playing well this season and they’ll look to feast on Titans quarterback Marcus Mariota Sunday in Tennessee. In the end, the team that runs the football the best in this game might just ultimately win it. A Ravens loss will severely put a damper on their second half hopes of overtaking the Steelers in the AFC North. However, a Sunday win over the Titans could ultimately help the Ravens in the Wild Card race later in the season. As always, Steelers fans should hope for a Ravens loss.

The Bengals barely avoided an embarrassing loss to the Indianapolis Colts last Sunday and in Week 9 they’ll carry their 3-4 record to Jacksonville to face the 4-3 Jaguars and their top-rated defense, which has been especially good against the pass this season. The Bengals are 1-2 on the road this season while the Jaguars are 1-2 at home. It will be interesting to see how Bengals quarterback Andy Dalton fares against the Jaguars secondary on the road. Additionally, it will also be interesting to see if the Bengals pass rush can wreak havoc on Jaguars quarterback Blake Bortles in his own stadium. A Bengals Sunday loss won’t leave them much room for error in their final eight regular season games of which three will be against AFC North teams.

The 6-2 Chiefs enter Sunday as road underdogs to the 4-3 Cowboys, who will have star running back Ezekiel Elliott in Week 9 thanks to him staving off the start of his six-game suspension once again. The Chiefs, however, will counter the Cowboys with their top running back Kareem Hunt. Additionally, Chiefs quarterback Alex Smith has several other offensive weapons at his disposal in the form of tight end Travis Kelce and wide receiver Tyreek Hill. The Chiefs enter Week 9 as the No. 2 seed in the AFC and a loss Sunday will drop them either further behind the Steelers in the conference. In summation, Steelers fans should be pulling for the Cowboys in this late afternoon game.

Is anyone really worried about these two teams entering Week 9? The Raiders have been very disappointing this season and another loss Sunday night to the Dolphins would result in them probably needing to win out in order to make the playoffs.. As for the Dolphins, they’re currently treading water with veteran backup quarterback Matt Moore. Miami was shutout in Week 8 by the Ravens and at 4-3 entering Week 9 they cant afford too many more losses. Here’s to the Raiders handing the Dolphins their fourth loss of the season Sunday night. Regardless of what ultimately happens in this game the Steelers will really be helped either way. 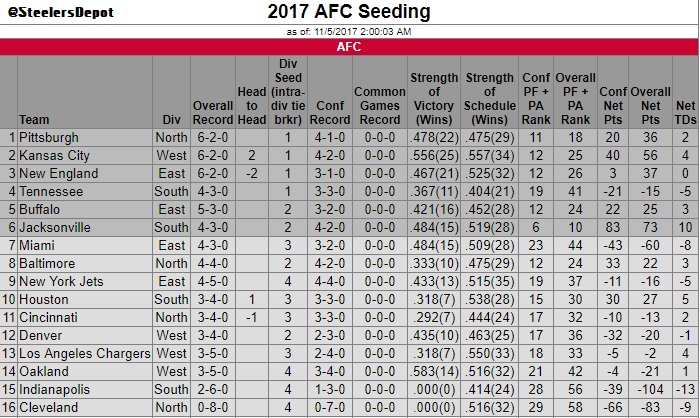