Breaking down the Indianapolis Colts’ defense.

It’s taken a big hit without their top defensive linemen RDE Henry Anderson. A middling run defense gets worse. Allowing 4.2 YPC, tied for 18th in the NFL, and they’ve allowed 10 rushing scores, dead last in the league. Allowed 26 runs of 10+ yards, tied for 9th most, and six of 20+, tied for 13th.

Margus Hunt is his most likely replacement, a familiar face after getting drafted by the Cincinnati Bengals. His stats aren’t gaudy and he never lived up to expectations in Cincy but he has a high pressure rate this season and his length makes throwing lanes tough. Elsewhere, ex-Steeler Al Woods will start at the nose and the squatty Jonathan Hankins at LDE. Hassan Ridgeway will rotate throughout.

Linebacker will have a couple of former Cleveland Browns – Jabaal Sheard and Barkevious Mingo. Best I can tell is the Colts play strengths at linebacker, not true positions. Shead is weakside, Mingo strongside. Interior has a mix of players. Antonio Morrison is the Buck (strong) LB and Jon Bostic the Mack (weak). But I’ve also seen #59 Jeremiah George get reps, too.

The fact they do that is good news. You can use motion to change the strength of the offensive formation and get their guys “out” of position.

Rookie Tarrell Basham gets some rotational work at OLB. As a unit, the Colts have 18 sacks this year. 10 of those are from LBs, six from their defensive line. Sheard is their leader with 4.5 and two forced fumbles. Glad Marcus Gilbert is back.

Couple other general defensive stats. Dead last in points per game (28.9), and near the bottom in third down defense (42.3%). Their red zone defense is better, 50%, good enough to be tied for 10th in the NFL.

The secondary is bad. Wait, worse than bad. One of the ugliest in the league. Beginning the year, it didn’t look that way. Vontae Davis was a solid corner and Malik Hooker a promising rookie at safety. Hooker was having a great year, three interceptions, before blowing out his knee. And Davis was cut this week after a falling out between he and the organization.

What’s left isn’t notable. The Colts projected starting corners are Rashaan Melvin on the left, Pierre Desir on the right. Mathias Farley and Darius Butler at safety (TJ Green may rotate in with Butler some, too). #27 Nate Hairston comes in as the nickel corner.

Interestingly enough, the Colts will play a true 3-3-5 in sub-packages. They keep all their DL on the field, though we’ll see if that remains true with Anderson out, and take off an OLB (usually Mingo). Like here. Sheard has his hand down.

Don’t see a lot of teams do it, especially as often as the Colts appear to do.

Colts do a nice job of mixing up their coverages. There’s no truly dominant look. Saw a lot of straight Cover 2 in Week 9 against the Houston Texans. Lot of Cover 1 and 2 Man the week previous against the Bengals.

There was one clear common thread though. Sam Fire Zone blitzes vs 3×1 sets with the Sam LB and the nickel corner (Hairston) coming. Two examples from both weeks. Steelers run the same thing with Mike Hilton.

In the red zone, you’ll get some quarters looks too. Check the depth of the safeties. Shallow safeties usually tip it off and the Colts don’t generally roll or disguise their coverages that well. Nothing like the Bengals do. 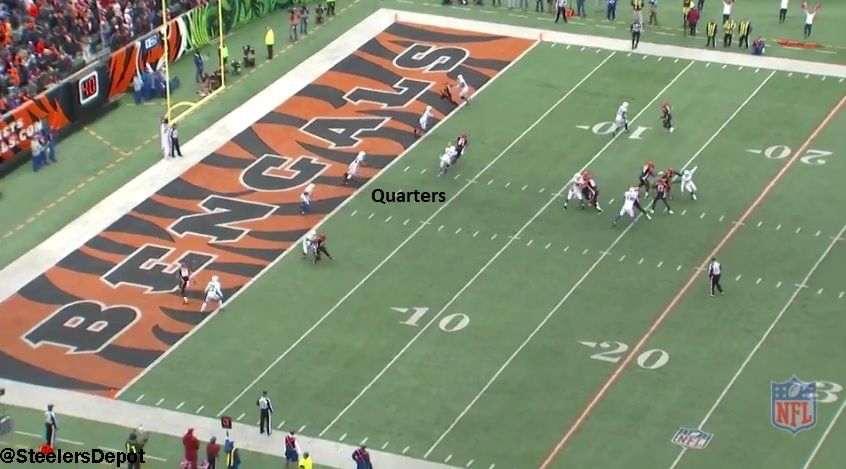 If there’s ever a chance for the Steelers’ offense to get going, it’s this week against a very banged up Indianapolis Colts defense. Let’s get to it.

A big blow to Indianapolis defensive line this week as it was announced defensive end/tackle Henry Anderson is out for the season due to a freak throat injury sustained last week against the Texans. This is a tough break for the Colts and Anderson, who looked great in his 2015 rookie season before going down with a torn ACL . He really hasn’t been able to get into a rhythm.  In his place will be Margus Hunt, who has seen some action this season but is a significant downgrade from the prolific Anderson.

This team likes to use their nose tackles Al Woods and Grover Stewart. Woods will see the vast majority of snaps at the position, but the Colts will sometimes put both of them out there in sub-package formations. When both of these guys are in, it’s difficult to run the football. Big bodies that display sound gap discipline. And even though he’s a nose, Woods has the most tackles along the defensive line. Jonathan Hankins rounds out the line as the pure defensive tackle. Hankins uses his hands well at the point of attack and is pretty quick for a 6’3” 320-pound man. With all that said, given injuries to the Colts defense and the talent on the Steelers offensive line, Pittsburgh should have no problem winning the battle in the trenches.

Fortunately for the Steelers it looks like John Simon will once again be unavailable to suit up on Sunday. Barkevious Mingo, the former Cleveland Brown, will fill in that edge rushing spot for Indianapolis. On the other side of the line is Jabaal Sheard, who tends to be inconsistent but can provide a big spark if not accounted for. Sheard doesn’t appear to have one single move, though his bull rush seems to be more impactful than his spin.  And he keeps tackles on their toes by mixing it up throughout the game. He had his way with Texans’ left tackle Julien Davenport last week to the tune of two strip sacks.

You can see his burst off the ball, and his ability to swing the tackle almost instantly. His quick hesitation freezes Davenport, and Sheard is able to win the battle along the edge on his way to the quarterback. Alejandro Villanueva is going to need to have some great footwork to avoid these disastrous plays.

Antonio Morrison and Jonathan Bostic are the inside backers. Morrison is a big-time hustle guy in his second season out of Florida. He isn’t the most athletic guy on the field, but he makes up for it with his tenacity. Always jumping on piles and in the middle of it almost every play. Very solid in the run game. Bostic is a fifth-year pro who is a pretty good all-around linebacker. He leads the team in tackles, as he doesn’t miss very many of those, and has the athleticism to make some plays in coverage as well.

Another banged up group on the Colts, who would’ve guessed? First they lose their talented rookie safety in Malik Hooker for the season and now…In a somewhat puzzling situation, the Colts released cornerback Vontae Davis after he chose to have surgery after suffering a groin injury. Their best corner is no longer on the team.

Rashaan Melvin and Pierre Desir are now the two outside corners. Melvin will most likely be lined up on Antonio Brown, though they do move people around, so he might not be shadowing Brown the entire game. He’s one to jam receivers at the line, but can sometimes rely too much on safety help.

Nate Hairston is the utility guy in this secondary. He has an array of skills which allow him to play along the line of scrimmage and also on the corners in space. Will rotate in at various spots, but largely will be used in the slot. They also like to send him on a blitz from the nickel position as well.

Matthias Farley is the strong safety and Darius Butler is the free safety. Farley is heavily involved in the run game and it’s showing up on the stat sheet. He’s second on the team in tackles. He never shies away from contact and can be dangerous on that safety blitz. Butler is much more the coverage guy, and his closing speed helps avoid big plays especially with dumps to the flats etc.

Here’s an example of Farley’s usage near the LOS. If they’re not running cover 2, it’s likely Farley will be within five yards from the line. But his assignments vary quite a bit from that spot. Farley is designated to the running back in the play below versus the Browns. But against the Jaguars, he’s responsible for the middle third in coverage. It’s hard to tell where he will be going any given play. 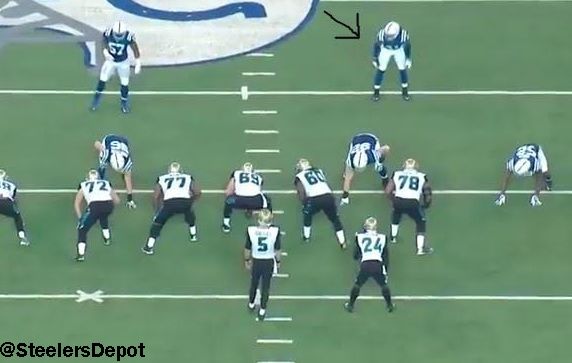 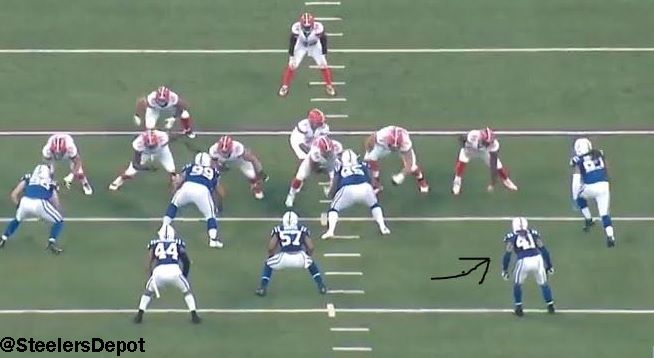 Safety T.J. Green will likely see some time as well. This team likes to put fresh legs on the field and utilize their sub-package players. We will likely be seeing seven different defensive backs on the field throughout the game, so the Steelers are going to need to make sure they key in on the matchups from play to play.

With how injury-riddled this team is, the Steelers offense has the opportunity for a huge game coming out of the bye, and perhaps get this thing rolling heading into the second half of the season.