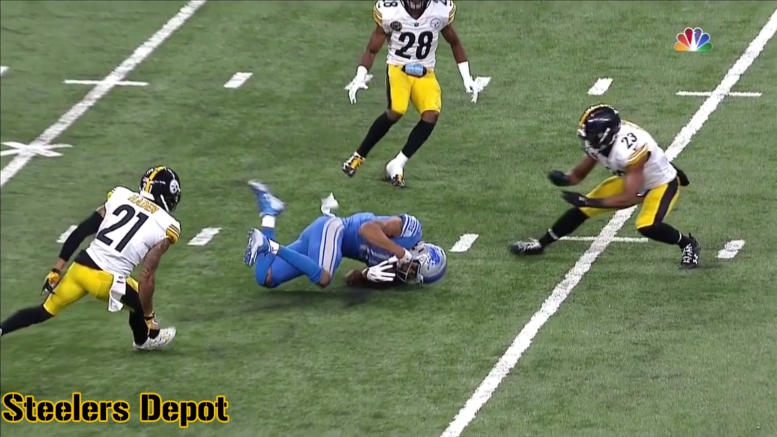 I noticed an odd comment earlier this week in response to one of the articles we wrote. I don’t recall which article, or who said it, but one commenter was bemoaning the fact that Pittsburgh Steelers safety Mike Mitchell somehow always manages to escape criticism.

After doing a real-life double-take, it occurred to me that I had just seen the unintentionally funniest thing that I have read in the comments in a while. The idea that Mitchell is somehow free from criticism, when he may well be the most-widely criticized player on the entire team, is certainly worth a chuckle for me.

So in that spirit, here’s my film study on Mitchell from Sunday, obviously in the first half, since he checked out early in the second half. A mixture of good and bad, as these things tend to be.

We did start off with the good on the first play of the game. The tight end motioned left to right, which saw Sean Davis drop out of the box and Mitchell replace him on the strong side. Good idea, as he ended up with the ankle tackle on the play for a loss of four.

At the end of the quarter, Matthew Stafford looked for his tight end, Eric Ebron, deep down the middle. With Ryan Shazier covering underneath, the ball was a bit long, but Mitchell was there to hammer him anyway in case he caught it, looking to separate man from ball.

Late in the half, Stafford hit receiver T.J. Jones down the left sideline for 25 yards, with Artie Burns looking like he’s thinking he’s passing the target on. Perhaps he was. And if so, Mitchell was late shifting over. He put a big hit on the receiver, but he held on.

On the next play, with the Lions running a sweep off a touch pass, Mitchell found himself among the last line of defense, bringing down rookie Jamal Agnew after a 12-yard gain.

Stafford really had success picking apart the zones in Pittsburgh’s coverage—helped by the fact that they often forced a safety into direct coverage—and Jones got himself another one late in the half.

Mitchell rotated closer to the numbers on Joe Haden’s side before the snap, but neither he nor the cornerback were able to stop a perfect throw from the Lions’ quarterback for a big 34-yard gain.

These are the sorts of plays fans are looking at when they bang on the table and curse Mitchell’s name, saying that he is too slow, doesn’t react quickly enough, and needs to move to strong safety. I’ll just leave this all here and let you discuss amongst yourselves.