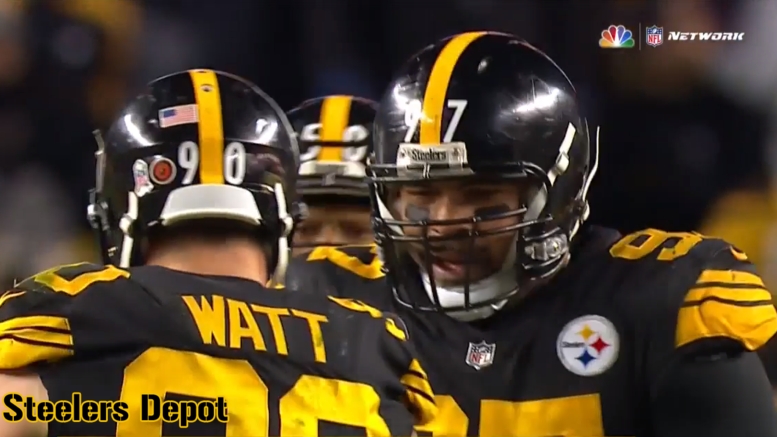 While the Pittsburgh Steelers’ defense overall last night left quite a bit to be desired, giving up four touchdowns to a Packers team with a backup quarterback on the road, there were still some positives to take from the game. Chief among them is the continuing Pro-Bowl push of defensive end Cameron Heyward.

One game after posting two sacks, the seventh-year man did it again, now with four in the past two games, the fifth time he has recorded multiple sacks in a game in his career, and the second time he has done it this season.

Those numbers give him nine sacks in total on the season, which is the third-highest total by a Steelers defensive lineman in team history. The top two sack seasons are both owned by Keith Willis. With Heyward’s next sack, he will join his predecessor as the only two linemen in team history to record double-digit sacks in a single season.

For the game, he added six tackles to his two-sack showing. That included a stop on third and two on a shovel pass to Randall Cobb, another stop on second and five, and a tackle for a loss of two, along with Mike Hilton.

As has been the case for most of the season, of course, Heyward provided a lot more pressure beyond just the sacks that he generated. He had at least a couple of hits on quarterback Brett Hundley during the game, and was a problem all night for left tackle David Bakhtiari, who is one of the better players at his position.

All this brings me to my main point: go vote for Cameron Heyward in the Pro Bowl voting. He deserves it. He’s earned it. He said himself that it’s something he would appreciate. He is putting up the numbers. If he is unable to make it in the voting this year, then he never will. He is playing the best football of his career, and some of the best in the entire NFL.

In 11 games, Heyward now has 38 tackles on the season, and a fumble that he recovered himself, to go along with his career-best nine sacks. He, as a 3-4 defensive end, is now tied for eighth in the entire league in sacks.

There are only three other players in the AFC who have more sacks than Heyward, and two of them are the Jaguars’ 4-3 defensive ends. The other is Joey Bosa out in Los Angeles, another primarily 4-3 defense. Yet these are the players he is being compared to—and he stacks up.

As a matter of fact, I would go so far as to say that Heyward is deserving of All-Pro consideration for his play this season to date. If not at least first-team All-Pro, then certainly the second-team unit. He has had back-to-back big times in primetime; it’s time for him to stop being underrated and start being recognized at the level his play entitles him to. You can start by helping to vote him into the Pro Bowl here.