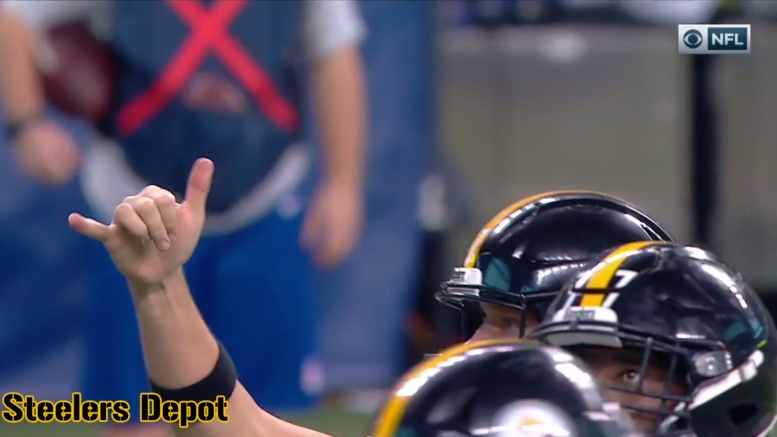 The Pittsburgh Steelers faced a critical moment, something of a gut-check scenario, early in the fourth quarter just after quarterback Ben Roethlisberger was able to complete a seven-yard pass into the end zone for Vance McDonald’s first touchdown while wearing yellow pants.

That touchdown, following an earlier point-after attempt that was blocked, put the Steelers behind the home-team Indianapolis Colts by a 17-15 margin, meaning that they needed to go for a two-point conversion if they wished to tie the game.

They did. And they wanted to be sure that they were right. They used a timeout to make sure they were all on the same page—they weren’t. Le’Veon Bell, at least, didn’t know where he was supposed to be on the first attempt at running a play, and they ended up drawing a delay of game, after a timeout, pushing them back to the seven-yard line.

According to Ben Roethlisberger, offensive coordinator Todd Haley at this point wanted to just kick the extra point. I would imagine that rather few two-point opportunities are still attempted after drawing a penalty, unless it is absolutely necessary.

Joe Rutter quoted Roethlisberger as saying that it was Mike Tomlin, “Coach T”, whose voice he heard overriding Haley, telling him to let the offense go. Considering how generally poor the offense had been—and even how few two-point attempts they have converted over the past two years—it was certainly a gutsy roll of the dice.

But it paid off, and very nearly was essential. Running the two-point play from the seven-yard line, Roethlisberger was able to find Martavis Bryant in the end zone, making a nice catch for the conversion and making it a 17-17 game at the time.

The Steelers drove on their next possession, but stalled in the red zone, which led to a Chris Boswell field goal attempt. He bounced it off the right upright and out, no good. He did not get a chance to redeem himself until the end of the game with time expiring. That kick would have still won the game, but had he missed that as well, they would have gone home losers, rather than gone into overtime.

That was only the second two-point attempt for the Steelers of the year, though the third that they lined up for. They wanted to attempt one in the second game of the season, but they drew a delay of game then, early, and decided to kick the extra point instead.

It was a big moment for the team to get their first conversion of the year, and under rather unusual circumstances, but Roethlisberger and Bryant game through—as did the offensive line, which provided the requisite protection on the play.