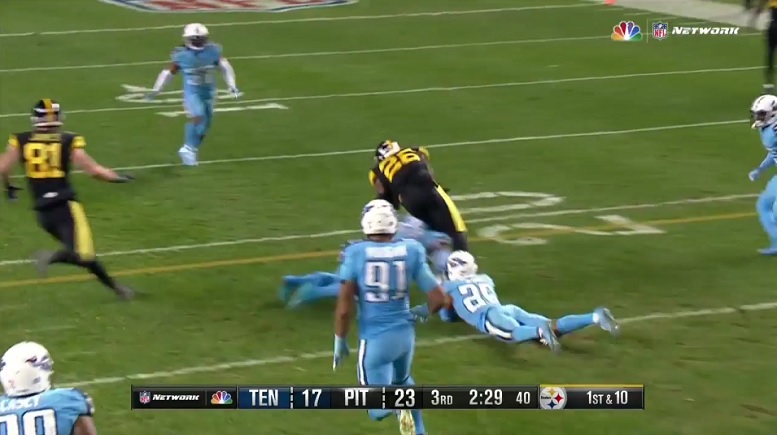 In case you may have missed it Thursday night, the Pittsburgh Steelers didn’t rely very heavily on running back LeVeon Bell in their big home win over the Tennessee Titans. In fact, while Bell did play all but 8 of the team’s 76 total offensive snaps Thursday night, he only touched the football 21 times in total and that’s his fewest amount of touches in a single game since the team’s Week 3 loss to the Chicago Bears.

Bell’s lighter usage Thursday night probably shouldn’t have come as a big surprise on the short week and especially when you consider that he had touched the football 131 times in the team’s previous four games.

While rookie running back James Conner only played 8 offensive snaps Thursday night, every snap that gets Bell off the field for could come in handy come playoff time. Conner would have likely spelled Bell even more than he has this season if his pass protection were up to par. Regardless, the Steelers won, and Bell is still healthy, even though he did take scary shot to his lower legs after one if his nine receptions Thursday night.

In essence, the Steelers now have a mini bye week ahead of them thanks to them playing Thursday night. Their next game will be a week from Sunday against the Green Bay Packers and that night contest will also be played at Heinz Field. Basically, Bell has a few extra days of rest ahead of him and that comes on the heels of him only touching the football 21 times against the Titans. Against the Packers, it will be interesting to see how many touches Bell ultimately receives and if Conner is able to spell him another 8 to 10 plays.

Bell will likely remain the league leader in total touches (281) and offensive snaps played (627) by a running back entering Week 12.