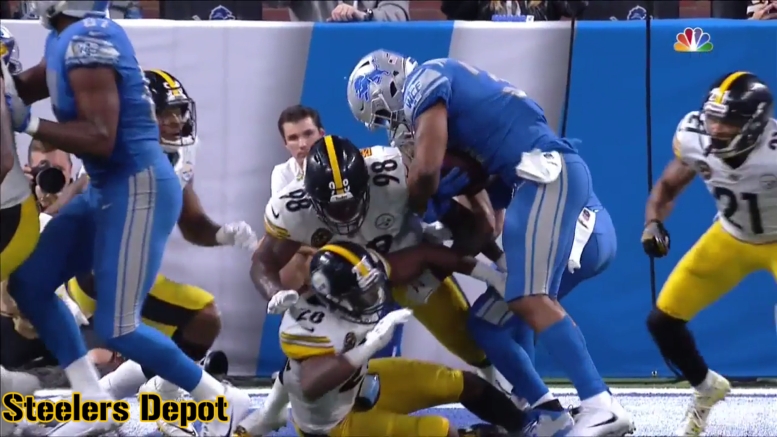 There was a lot of consternation within the fan base over the Pittsburgh Steelers’ decision to hand the keys of the buck linebacker position over to fifth-year inside linebacker Vince Williams full-time, but once the games started being played, we haven’t really heard all that many complaints.

While he has been taken off the field at times in clear passing situations in favor of a fourth cornerback, we generally have not seen the huge liabilities in coverage that many were expecting, and he has generally served well in his role. He was second on the team—behind Artie Burns, of all people—with eight tackles yesterday, now with 42 tackles on the season, to do along with four sacks.

I think it is fair to say that Williams is a player that Head Coach Mike Tomlin would describe as an “energy-bringer”. It’s something that he has consistently brought on special teams for years, but has not had the consistent opportunities to show that he can do it on defense as well.

But quietly, he is proving to be something of an emotional leader and mouthpiece for this unit, even if he is not calling the plays—something Ryan Shazier insisted on retaining for himself. And he spoke on defense of the defense after they shut the Lions out in the red zone last night.

He told Jeremy Fowler that they felt disrespected by the Lions’ attempts to score touchdowns on fourth down against them. “I felt they were trying us”, he said to the ESPN reporter. “It’s disrespectful. [Matt Prater’s] a great kicker. You better run him out here or y’all ain’t about to get any points”.

Steelers LB Vince Williams on Lions’ fourth-and-goal tries: “I felt like they were trying us. It’s disrespectful. Prater’s a great kicker. You better run him out here or ya’ll aren’t about to get any points.”

Detroit entered the red zone three times, ending up with three field goals to show for it, and two trips that ended in turnovers on downs. Prater also hit two long field goals from 49 and 51 yards to total their 15 points on the night.

Williams also told Fowler that Tomlin gave the defense a message. “The red-zone defense sucks”, the reporter paraphrased via Twitter, “and the only thing saving it is teams aren’t getting down there much”.

Message from Mike Tomlin to defense during the week, via Vince Williams: The red-zone defense sucks, and the only thing saving it is teams aren’t getting down there much.

As I wrote about last night, the script was flipped in Detroit. They had no trouble getting down the field, but could not capitalized on their deep drives. Previously, teams struggled to sustain drives down the field, but had a good success rate in getting touchdowns when they did.

The Steelers enter the bye week knowing that they still have plenty to work on entering the proverbial back nine of their season, but they do so with a mind at ease, understanding that they are in pole position for both the division and the conference.

Continue building on the situational success on defense, while plugging up the holes that Matthew Stafford poked through on the night, and this defense can really turn into something when it comes time for a playoff push. And who will be front and center in their efforts? Vince Williams.