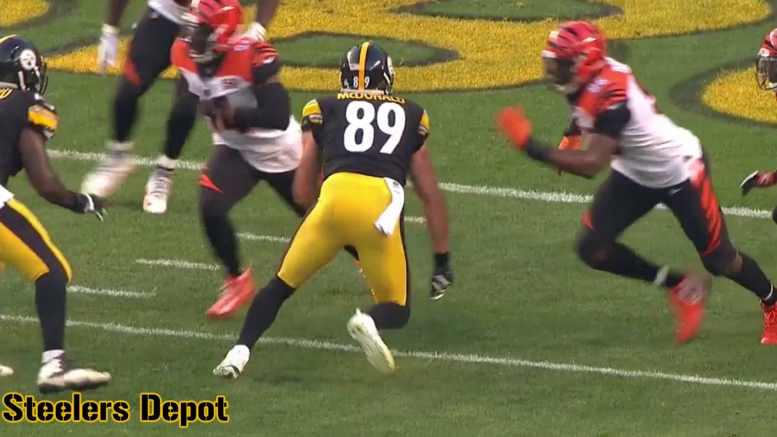 During last week’s game against the Chiefs in Kansas City, the Pittsburgh Steelers were finally able to get tight end Vance McDonald a football that he could catch, and he hauled it in for a big gain. After that contest, quarterback Ben Roethlisberger said that they wanted to see him get more involved in the offense.

A former second-round pick, McDonald was brought into Pittsburgh via an August trade with the 49ers. He was brought in very late in the process, so it should not be much of a surprise that he may have taken a while to get going.

But based on Sunday’s showing, it’s clear that the Steelers were getting McDonald involved. In fact, if not for a sudden change of plans in the second half after he suffered a minor knee injury, chance are that he would have led all tight ends in snaps in the game.

So, did the team just quietly make him the starter? I think the biggest tell in that regard is the fact that, when the Steelers entered their two-minute offense at the end of the first half, it was McDonald, and not Jesse James who was on the field and running the up-tempo offense.

He did technically start—both he and James—because the Steelers opened in a 12 personnel set. But James came off the field on the next play, while McDonald remained. James missed the next four snaps, in fact, with even Xavier Grimble getting a snap in between, while the new kid on the block played the first seven snaps of the game.

He played all but eight snaps in the first half, actually, totaling 28 before the teams parted ways into their respective locker rooms. James, in comparison, played 17, while Grimble played two, both of which also included McDonald. They did not use any 13 personnel sets.

Unfortunately, his playing time ended just four snaps into the second half, on which he saw action for three plays. In contrast, James stayed on the field for the entirety of the second half, since, really, there wasn’t anything left for them to do. He had to be used.

They did liberally use Grimble from that point forward, seeing 24 snaps of action in the second half, excluding the victory formation, out of 32 total offensive snaps run. So that tells you have invested they were in using two-tight-end sets that even after McDonald went down, they just plugged in their third option.

It is somewhat surprising that they did not at all turn to B.J. Finney as a tackle-eligible, which they had done a bit earlier in the season when Chris Hubbard has been in the starting lineup.

Either way, assuming that McDonald is okay to go against the Lions, it will be interesting to see what happens. Is he starting now? We don’t really know at the moment. But it does seem clear that he will play more frequently, regardless.