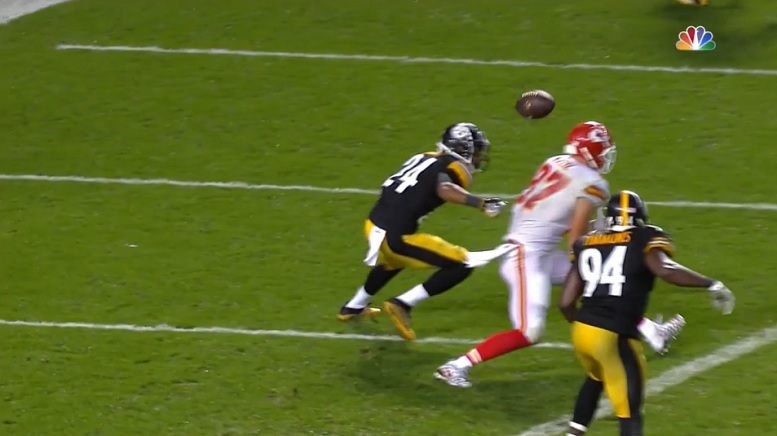 Through the first five games of the 2016 regular season, Kansas City Chiefs tight end Travis Kelce has been his usual difference-making self. He is already up to 29 receptions for 353 yards and a pair of touchdowns. The receptions and yardage numbers rank second only to the Eagles’ Zach Ertz, who has already played six games, while only four tight ends currently have more touchdowns.

The Pittsburgh Steelers played him well during their regular season blowout of the Chiefs a year ago. While he had a touchdown, it came very late in the game with eight seconds remaining, with a final score of 43-13. He had five receptions for just 23 yards.

In the postseason rematch, it was a bit of a different story. In a game in which the Steelers only escaped in part because of a failed two-point conversion attempt, Kelce came up with some big receptions that helped to set up scores.

On the Chiefs’ opening drive, for example, he took a 10-yard pass 21 yards from the Steelers’ 41-yard line to the 20. Three intermediate passes to wide receivers later, Kansas City was on the board with an early 7-3 lead.

On their final possession, which nearly tied the game, the Pro Bowl tight end kicked things off with a 24-yard reception in soft zone coverage, taking the ball to midfield. He later critically came up with a 17-yard reception after they were backed up into a second and 25, giving them a comparably manageable third and eight to contend with. They did, and ultimately they got into the end zone on a methodical 13-play drive.

Kelce was knocked out of Sunday’s game after taking a hit to the head and suffering a concussion, but he was able to clear the concussion protocol by Friday and has been listed as on pace to play. The Steelers will have to figure out how to contain him again.

Outside of his mysterious lack of productivity against the Chargers—one reception for one yard—Kelce has had at least five receptions in every other game, and has three (or nearly three) 100-yard games, finishing up Sunday’s game with eight receptions for 98 yards.

Now, the Steelers haven’t been tested a ton through the air this season, facing among the fewest total passing attempts against them in the league, but though they are also allowing the fewest yards per pass attempt, the Chiefs are also easily the best team they will have faced up to this point.

Alex Smith has historically been seen more as a game manager, but he has been deadly this year with precision accuracy and even life on his deep ball. Rookie running back Kareem Hunt necessarily is a lurking threat against which to be cautious, but they need to be proactive in defending Kelce as well.