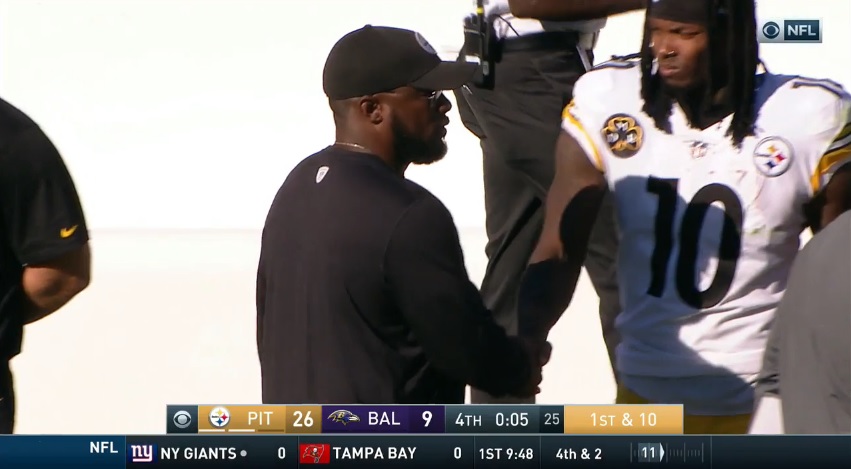 It wasn’t pretty by any means, but Sunday’s 26-9 win over the Baltimore Ravens on the road for the Pittsburgh Steelers was a big win, mainly because of what we saw from Le’Veon Bell and the Steelers’ offensive line against a stout Baltimore defense.

Sitting at 3-1, the Steelers are in a good spot through four weeks. While there are certain areas that need to improve moving forward, a 3-1 start is one that most fans will take.

As I do following each game, I’ll take a shot at grading each position group below.

A few days after saying he needed to be better on his weekly radio show, Ben Roethlisberger simply wasn’t. It’s becoming a serious concern at this point.

Against Baltimore, Roethlisberger completed just 18-of-30 passes for 216 yards, one touchdown and one interception. Those numbers are nowhere close to what a great quarterback should be doing.

Roethlisberger’s interception was rather bizarre, but he have some nice throws throughout the game, including two hook-ups with Martavis Bryant, but he continues to struggle with the deep ball and seeing the whole field, having missed Antonio Brown breaking wide open in the middle of the field in the first half that would undoubtedly gone for a touchdown.

Fortunately for the Steelers, Roethlisberger was able to spread the ball around on a day that he didn’t need to be great, thanks to the Steelers’ run game.

For the third straight week, Bell looked good on the ground, at least from my vantage point.

Facing a tough run defense in Baltimore, the Steelers simply ran Bell over and over and over again as Bell received 35 carries on the day, gaining 144 yards and two scores, including a long of 21 yards.

Behind Bell’s big day, the Steelers were able to grind out the road win in the division. Rookie James Conner also looked strong on the ground in limited action, gaining 26 yards on four touches, including a big run in the first quarter that seemed to spark the Steelers’ offense.

In the passing game, Bell added four catches for 42 yards, finishing with 186 total yards on 39 touches on the day.

Shout out to Roosevelt Nix, too. He was absolutely integral to Bell’s big day, often clearing the way on Sunday, allowing Bell to pick his path.

Brown faced a lot of double coverage on Sunday, which rendered him mostly invisible against the Ravens, finishing with just four catches for 34 yards. As I mentioned earlier, Brown did break wide open up the middle of the field and Ben simply didn’t see him, which led to AB losing his cool on the sideline, throwing a Gatorade jug and getting into a spat with Todd Haley.

I have no problem with AB’s outburst. He wants to win, wants the ball and is starting to get frustrated with Ben’s up-and-down play, as we all are.

Outside of AB, Bryant had a solid day, finishing with three catches for 48 yards, including two impressive catches in the second half where he had to go up and high-point the football in traffic.

Rookie JuJu Smith-Schuster is becoming one of my favorite Steelers, mainly because of his maturity beyond his years for the position.

Smith-Schuster finished with three catches for 47 yards and a touchdown where he worked open in the middle of the field and worked back towards Ben, who scrambled, capping off the catch-and-run for a 19-yard touchdown.

Blocking, Smith-Schuster continues to impress. On Bell’s first touchdown Smith-Schuster blasted Za’Darius Smith on the goal line. While it was away from the play, I love the effort from the rookie receiver.

Jesse James continues to be the No. 1 pass-catching option at the position as the third-year tight end finished with three catches for 40 yards, including a big catch-and-run on Pittsburgh’s first drive of the game to pick up a first down.

Vance McDonald continues to struggle to catch the ball, dropping a pass in the middle of the field, but the veteran tight end continues to make an impact as a blocker, helping open big holes for Bell on the day.  James struggled as a blocker on Sunday, taking bad angles to blocks, often reaching and missing.

The starting unit finally started to look like itself in Baltimore, helping the Steelers rush for 173 total yards against a really strong Baltimore front seven.

Often times, the Ravens stacked the box with 8 or 9 guys, and it didn’t really matter to the offensive line.

While this group churned out yards on the ground, it continues to struggle with penalties as the unit was hit with six penalties on the day as David DeCastro (2), Chris Hubbard (2), Maurkice Pouncey (1) and Alejandro Villanueva (1) were hit with penalties. Only Ramon Foster went without a penalty on the day up front.

DeCastro was excellent as a run blocker, but he needs to clean up the pre-snap penalties. Villanueva lost his cool, surprisingly.

Aside from the strong day on the ground, this unit continues to struggle in pass protection. Granted, the Ravens had just one sack on the day, but Baltimore got seven quarterback hits on the day, pressuring Roethlisberger a ton.

Cam Heyward continues to put together a Defensive Player of the Year-worthy start to the season. His tape has been ridiculously good through the first four weeks of the season, and he continued that dominance on Sunday, finishing with four tackles, two sacks, two quarterback hits and one fumble recovery against the Ravens.

Along with Heyward, Stephon Tuitt made his return to the lineup shaking off a bicep injury. The Notre Dame product picked up right where he left off, living in the backfield to help shut down the Baltimore rushing attack while adding half a sack in the win.

Javon Hargrave was mostly quiet on the day, finishing with just one tackle, coming off the field often in nickel.

Shazier was all over the field, finishing with 11 tackles, one interception and three pass deflections, one of which led to Mike Hilton’s late interception. In Baltimore, I didn’t see many tackling issues from Shazier, which is a tremendous improvement from last week.

Alongside Shazier, Vince Williams was good against the run when in the game, finishing with just three stops, but all were solid against the run. Bud Dupree really stood out to me rushing the passer, putting continuous pressure against Joe Flacco on the day, as did rookie TJ Watt, who returned from a groin injury.

The two outside linebackers finished with four tackles each, helping the Steelers’ D get off the field time and time again against the run and pass.

Just like the linebackers, this was a much better performance by the Steelers’ secondary on Sunday in Baltimore.

One week after struggled in run support, the secondary was mostly good in that area this week, aside from JJ Wilcox getting caught flat-footed on Alex Collins’ long run in the second half that put the Ravens in scoring position.

Joe Haden missed a couple tackles on the boundary, but he continues to get more and more comfortable in Keith Butler’s system. It did look like he was the man responsible in zone coverage on Mike Wallace’s touchdown, but I’ll have to see All-22 to be 100 percent sure.

Sean Davis had a really good game, breaking up a pass in the middle of the field to get the Steelers’ D off the field. I know some fans are down on him, but the kid can play and he looks to be back on track after an off-season shoulder surgery.

Artie Burns finished with four tackles and one pass deflection on the day, mostly shutting Breshad Perriman and Jeremy Maclin on the day, while Hilton was tremendous as a blitzer off the edge, sacking Flacco once and forcing a throw away on another play.

The Ole Miss product added an interception to seal the win. He’s looked like Pittsburgh’s best corner through four weeks.

Chris Boswell hit two of three field goals in the win, but his one miss led to a Ravens touchdown, which seemed to flip momentum to Baltimore for the time being.

Punter Jordan Berry averaged just 37.5 yards per punt, including a short punt that gave the Ravens great field position. Fortunately the Steelers defense stood tall like they did all game long.