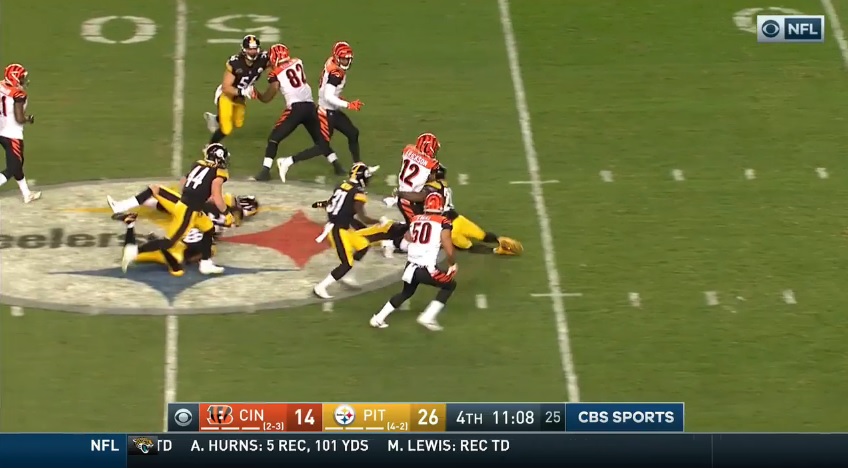 In another physical, intense rivalry matchup against the Cincinnati Bengals Sunday at Heinz Field, the Pittsburgh Steelers and their ever-improving defense came through with another impressive display of tackling in a 29-14 win.

Much like last season in Cincinnati when the Steelers missed just five total tackles in a 24-20 win last December, the Steelers stood tall in the tackling department on Sunday, coming up with key open-field tackles and applying serious pressure off the edges to fluster Andy Dalton and the Bengals’ attack.

He’s getting better and better each and every week and is simply dominating sideline to sideline for the black and gold.

TJ Watt is on a missed-tackle per game trajectory (remember, he missed the Bears game), but the rookie has been exceptional as a pass rusher and run defender, so the missed tackles are something to live with, considering almost all of his misses have been on or behind the line of scrimmage before being cleaned up by a fellow defender.

Let’s get to Sunday’s performances though.

Early in the second quarter, Joe Mixon looked to establish a run game for the Bengals, having ripped off a long 26-yarder in the first quarter. But here, the Steelers flowed to the ball well, shutting Mixon off the edge quickly.

However, both Javon Hargrave and Watt missed tackles here as Hargrave went low under Cincinnati blockers to grab Mixon’s ankles, while Watt spun back inside off a block to hit Mixon around the waste.

The rookie back was able to shake both tackles, but a host of Steelers defenders were right there to clean up the miss. Additionally, LT Walton was called for a hold on the play, adding another 5 yards to the end of the run.

Late in the third quarter, the Bengals were desperate to try and get something going offensively as the Steelers pulled away. Facing a 1st and 10 following a Steelers field goal, Dalton dumps a short pass off to his right for Mixon, who gets absolutely blasted up high along the right sideline by second-year safety Sean Davis.

While it looks good on tape live, this is a missed tackle by Davis regardless of the big hit. Instead of using the sideline to his advantage to force Mixon out of bounds, Davis goes for the kill shot, hitting high against a big, strong running back. After hitting Mixon high, Davis stands around and watching Mixon try and fight for more yardage.

Although I thought Davis was pretty good on Sunday, I’d like to see him use better technique in situations like this. Granted, the missed tackle didn’t come back to bite the Steelers in the situation, but you never know what could happen down the stretch with plays like this.

Finally, on a punt return by Alex Erickson in the fourth quarter, both Darrius Heyward-Bey and Kameron Canaday find themselves on the missed tackle report for the first time this season.

Following a long punt from his own end zone by Jordan Berry, standout Bengals returner Alex Erickson shakes loose for a 19-yard return, setting up the Bengals on the Steelers’ side of the field late in the game.

On the return, Mike Hilton looks a bit hesitant to jump into the fray for a possible stop (no, this wasn’t his missed tackle), which leads to DHB and Canaday trying to bring Erickson to the ground.

DHB goes for the arm tackle, allowing Erickson to shed him easily, while Canaday doesn’t use good form, bouncing right off of Erickson’s legs. It’s hard to fault Canady for the missed tackle since he rarely gets the opportunity, but this can’t happen with DHB, considering he’s on the team for his special teams abilities.

As I said in the positional grades piece, Danny Smith needs to clean up the kick coverage units.