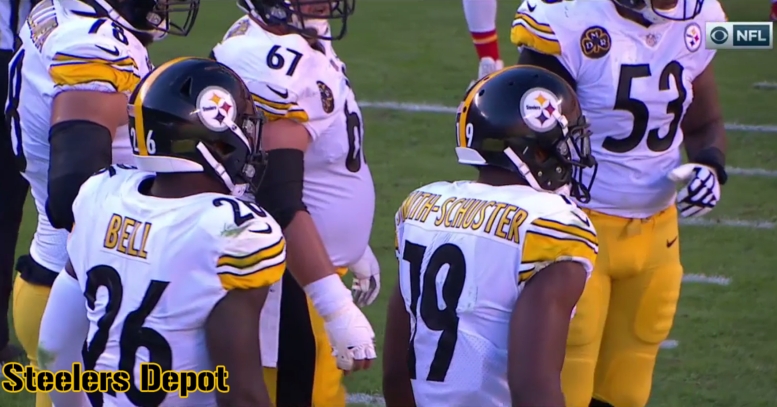 I was going to come into this article looking to praise the Pittsburgh Steelers and their ability on Sunday to run successfully out of the 11 personnel package against the Chiefs, demonstrating how dangerous they can be still finding success rushing with three wide receivers on the field.

Then I went and actually checked the numbers in my charting. 17 of the Steelers’ carries against the Chiefs were executed out of the 11 personnel, but, at least on a yards per carry basis, it wasn’t the blistering success I was anticipating. Their net average on those 17 plays was just 3.35 yards.

That does include that long 26-yard run from Le’Veon Bell that ended up being wiped out by a penalty, which ended up going as a loss of eight yards. If you include that gain, then suddenly they averaged 5.35 yards. If you remove it from the occasion altogether, they did average 4.06 yards, which is respectable.

It’s not easy to run out of sets with three receivers on the field. While you may get a slight boost in terms of the defense being less cued into the play being a run, even the best wide receivers can only hope to match perhaps an average tight end as a blocker. For the record, JuJu Smith-Schuster was on the field for all of those plays.

More important than yards per carry though is successful play ratio. How many of those 16 plays—sans the penalty—were successful plays for the offense? The answer is eight. Eight out of 16 runs out of 11 personnel were successful, for a quite solid 50-percent success rate.

Where we get to some bumps in the road are the negative plays. There were a few schematic deficiencies that led to plays being blown up. The Steelers lost yardage on three of those 16 non-penalty runs, including twice for a loss of four yards.

The worst of those undoubtedly came on second and goal from the two-yard line three minutes away from the end of the second quarter. On the left side of the offense, the combination of Smith-Schuster, Jesse James, and Alejandro Villanueva ended up leaving one defender unblocked, who easily penetrated and strung Bell out wide. There was little the back could do.

Only one of those plays came on third down, however, and that was on a third and nine, no less. They converted that—not something you see too often, and something that I actually wrote about yesterday in a film study.

For the record, the Steelers averaged 7.17 yards per carry on 18 runs out of heavier personnel, which came out of a mixture of 12, 21, and 22 personnel, with not usage of 13 this week—the latter being impossible once Chris Hubbard had to come into the game.