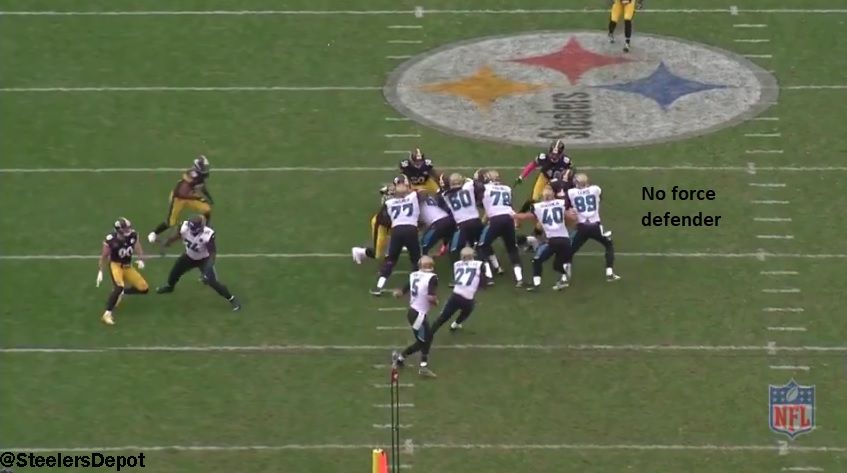 The Pittsburgh Steelers defense gave up 231 rushing yards to the Jacksonville Jaguars at home on Sunday and that included rookie first-round running back Leonard Fournette rushing for 181 of those yards and two touchdowns on 28 carries. With that game now behind them, the Steelers defense must now recoup and get ready to play against the Kansas City Chiefs and their rookie running back Kareem Hunt this Sunday on the road.

Hunt, who was drafted this year by the Chiefs in the third round, currently leads the league in rushing with 609 yards on 97 carries. The Toledo product has also been a beast so far during his rookie season on first downs as well. On 64 first down carries so far this season Hunt has averaged a whopping 7.48 yards per tote and 6 of those carries gained 20 yards or more. If that’s not enough to scare Steelers fans ahead of Sunday’s game, Hunt has already regretted 18 carries of 10 or more yards entering Week 6.

When you look at the Steelers run defense from a statistical perspective through their first five games it’s not a pretty sight as their 5.06 yards per carry average is currently the second-worst in the league entering Week 6. That stat, however, is a little skewed as that unit has allowed five runs of 25 yards or more so far this season with one those being a late 90-yard touchdown run by Fournette this past Sunday.

So, is the Steelers current run defense ranking a solid reflection of how they’ve played through five games? Well, yes and no. The numbers are the numbers for starters, so there’s your yes. However, when you look at the other 120 runs by opposing running backs so far this season you’ll see a more respectable yards per carry average of 3.56. Additionally, opposing running backs only have a 36.7% run success rate on 120 of 125 total runs this season.

With that statistical cherry-picking now complete, I need to point out that three of those five runs of 25 yards or more allowed by the Steelers defense in the team’s first five games have come on 1st and 10 plays and that of course plays right back into the concerns about Hunt’s stellar first down production in the Chiefs first five games of the season.

The key to stopping the Chiefs offense begins with stopping them on first downs with an eye toward ultimately getting their quarterback Alex Smith in as many third and long situations as possible. Even then, the revitalized Smith and the rest of the Chiefs offense will still be tough to handle as the Kansas City quarterback enters Week 6 having completed 22 of 27 third down and 6 or more pass attempts for 269 yards with one touchdown. Of those 33 total third and 6 or more drop-backs (6 sacks plus 27 attempts), Smith has converted 12 times (36.4%).

Smith, however, may or may not have tight end Travis Kelce this Sunday as he’s currently attempting to overcome a concussion he suffered in Week 5. With that said, Kelce reportedly will practice in some capacity on Thursday after sitting out the team’s Wednesday practice.

Additionally, the Chiefs will be without wide receiver Chris Conley on Sunday due to an injury and fellow wide receiver Albert Wilson is attempting to overcome a knee injury he suffered this past Sunday.

All of the Chiefs currently ailing players aside, wide receiver Tyreek Hill remains a huge threat not only as a pass catcher but as a runner as well. Regardless, whether or not the Steelers defense has success on Sunday in Kansas City will more than likely eventually boil down to how they handle Hunt. If they can control him somewhat on early downs and not allow him to get loose for explosive plays, that will go a long way in keeping the Kansas City scoring down.