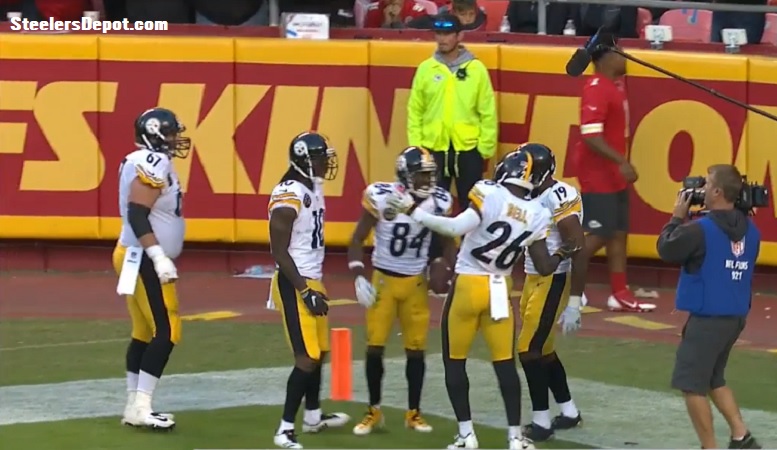 Those who viewed the Pittsburgh Steelers victory over the Kansas City Chiefs Sunday witnessed a fair share of notable firsts. For the first time this season, the Chiefs were defeated. But just how does an insurmountable Chiefs team fall to a Steelers’ team that was coming off its worse home loss in over a decade? Career games from Le’Veon Bell and Antonio Brown, that’s how.

While the Steelers are accustomed to seeing Brown and Bell seesaw off each other, both played a huge role in the Steelers’ victory Sunday. For the first time in their careers, Brown exceeded 150 receiving yards and Bell rushed for over 150 yards in the same game. A beautiful sight for the Steelers’ faithful and a frightening one for opposing defenses. Sunday’s performance will keep defensive coordinators scrambling as they fumble with a terrifying fear.

“How can I stop both when I can hardly stop one?”

Brown has also maintained his throne atop the NFL’s receiving leaderboard. The Steelers’ receiver leads the league in receptions (48) and receiving yards (700). Brown has not just beaten his competition, but he has overlapped them. The closest threat to Brown’s receiving yardage is Bengals’ receiver A.J. Green, who is still 196 yards shy of Brown.

Where Brown relates closely to Bell is his utilization of his touches. Brown leads the league in yards per touch with 13.8 yards per touch, a full yard better than his closest competitor. The duo are also fourth and fifth respectively in yards from scrimmage, with Bell tallying 706 yards and Brown just behind with 700 yards. No other team in the league has two players with even 500 yards of scrimmage apiece.

The Steelers offense has racked up 2098 yards this season, Bell and Brown have combined for 67-percent of the team’s offensive yardage. In their victory Sunday, the Steelers showed exactly why the tandem have been heavily relied on for two-thirds of the offensive production, as both Bell and Brown were able to take over the game like only they can.

As the Chiefs learned, stopping one of the two is a challenging task on its own, but being asked to stop both is an almost impossible one.