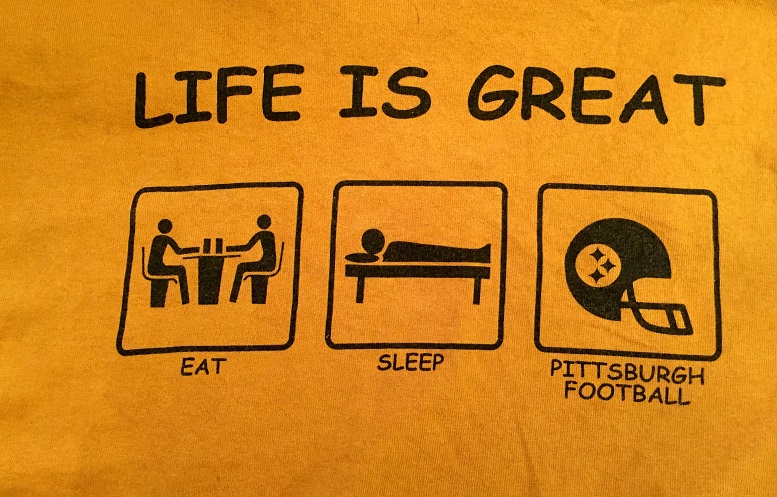 Well, fans of the Black & Gold from all over Steelers Nation must be feeling good this morning. A little more pep to the step; a smooth glide to the stride. A Pittsburgh Steelers victory has a way of chasing our troubles away – at least for a little while.

Monday morning, I woke up in a hotel room following a homecoming visit to my alma mater in Pennsylvania. Was driving south toward Maryland when I spotted Steelers spoor. 61 miles from Heinz Field and still in Steelers Nation. 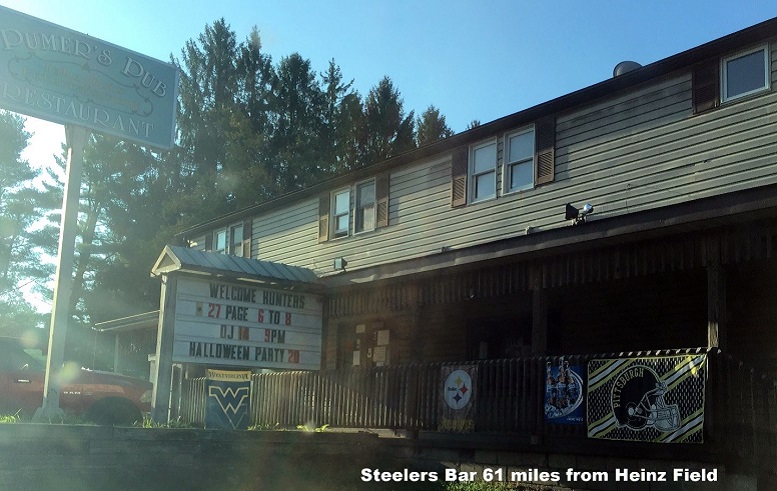 Arrived at the Outta the Way Café in Derwood, Maryland a full two hours before kickoff. Hearing reports of the Baltimore Ravens getting emBEARrassed. Not many fellow Steelers fans around at my Steelers bar – national broadcast. They have a San Francisco 49ers game on the big screen – just hoping it does not go to overtime. Finally, it is kickoff time for the game. Arrowhead Stadium is loud. I can attest to that after going to last year’s playoff game.

The Steelers came to play. The defense just shut down Alex Smith and Kareem Hunt. I don’t think the Kansas City Chiefs got a first down until late in the 2nd quarter. Le’Veon Bell was playing with alacrity. I like it. Don’t talk about your worth; demonstrate it on the field. Antonio Brown made a fantastic catch; he saved Ben from an interception and turned it into a 51-yard touchdown pass. AB more than made up for the miscues early in the game including not fielding the kick after the safety. Shame on Danny Smith; he should have reminded him that it was a live ball like a kickoff.

I liked the mix of passing and running. It was old school. 25 passing attempts versus 37 runs. A nagging issue remains the lack of scoring. This offense could be explosive but continues to sputter points. Just 17 this game. The defense is stepping up; though again the Steelers had to make the end of the game exciting. My big bold prediction was James Harrison making a pick 6. He failed me; but helped put the game away with a sack that put him over 80 for his career. I’ll take it!

To be fair; the Steelers started this game very healthy compared to the Chiefs that are banged up and missing some key defenders. No matter; Arrowhead is a tough place to perform and the Steelers did well enough to win. I’ll take that too!

There were 2,067 comments on the Steelers Depot First Half & Second Half game threads. SkoolHouseRoxx was excited at seeing James Conner make a strong run: “Nice run, rook!” However, Zarbor captured a lot of our feeling with, “All that dominance and the score is waaaaaaaaay too close.” Darth Blount 47, “Say what you will, but we came to play today. Will it be enough? We’ll see.” It was and I’ll take it.

In the end; all that noise in Arrowhead Stadium was reduced until the only sound that could be heard was the twirling of all those Terrible Towels whirling in the wind. The sweet sound of silence.

Of course, no Steelers game is complete without some off the field drama. This week’s episode of “How the Steeler’s World Turns” included a report from sport’s gossip columnist Ian Rapoport trawling the tweets of Martavis Bryant’s girlfriend to report that he had demanded to be traded several weeks ago.

Here is what Martavis had to say:

Big win today and tomorrow right back to work tomorrow I am happy to be a steeler and can't wait to reach number 7 this year.

I swear if Ben Roethlisberger farted; we would be evaluating its odor and resonance.

I will luxuriate in this feeling for a day or two; then start to worry; we got another game coming up. In the meantime; I bet a lot of you were excited for this win; no time to worry just now; because Bird is the Word for the day!