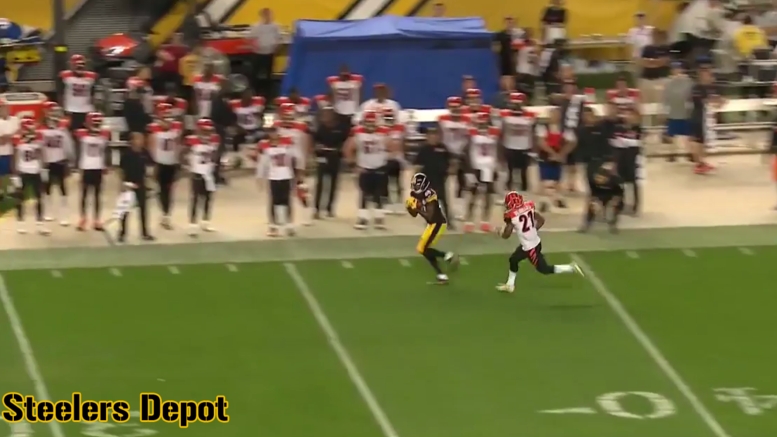 Ordinarily, I don’t need much of an excuse in order to write an article or two about Darrius Heyward-Bey, who is at this point the second-longest-tenured wide receiver on the team behind Antonio Brown. Martavis Bryant was drafted was drafted in the same year, but, well—you know. He kind of missed a year. And frankly it’s starting to look quite possible that Heyward-Bey will be here longer.

The former first-round pick of the Raiders, now 30, has worked his way into becoming an instrumental part of the Steelers’ coverage units on special teams, but also serves on the punt return unit as well. He is often among those with the highest snap counts. But he had one big, big snap on Sunday against the Bengals. We’ll get to that toward the end.

Let’s start off earlier in the game. On the Steelers’ first kick off of the game, they kept it short of the goal line to force a return, and the gamble worked, getting at stop at the 17. Heyward-Bey didn’t make the tackle, but he helped make the play. getting down the field quickly, as he always does, and taking on the lead blocker helped create a traffic jam and funnel the returner into the Steelers’ coverage.

On the first kickoff of the second quarter, he this time took a different approach, not engaging the lead blocker but instead trying to outmaneuver him. And he did, in actuality, only he was held, a penalty that should have been called, even if Heyward-Bey didn’t seem all too upset about it, giving the offender a slap on the rear end for the effort.

On the kickoff to open the second half, the returner this time opted to reverse course and try to return the ball away from Heyward-Bey, who, naturally got down the field in a hurry. But he is still quick, and he ended up helping Tyler Matakevich tackle him from the back side of the play.

But I know why you’re most likely here reading this, and it’s to see the play in the fourth quarter. Heyward-Bey, lined up as he always is as the right-side gunner on punt coverage, found himself left uncovered—as did the other gunner.

The Bengals put 10 men in the box, wanting to sell out for the punt block—a wise decision giving they were down two scores—but the Steelers had the play in their back pocket: Kameron Canaday snapped directly to Robert Golden, the upback, who made a nice throw to lead the gunner for a 44-yard strike.

And, hey, let’s give some credit here to Canaday. He was cut last year, and he’s trying to replace Greg Warren. It’s not easy snapping at an angle to a close target for a long snapper when—well, I mean, long is in the name of the position.