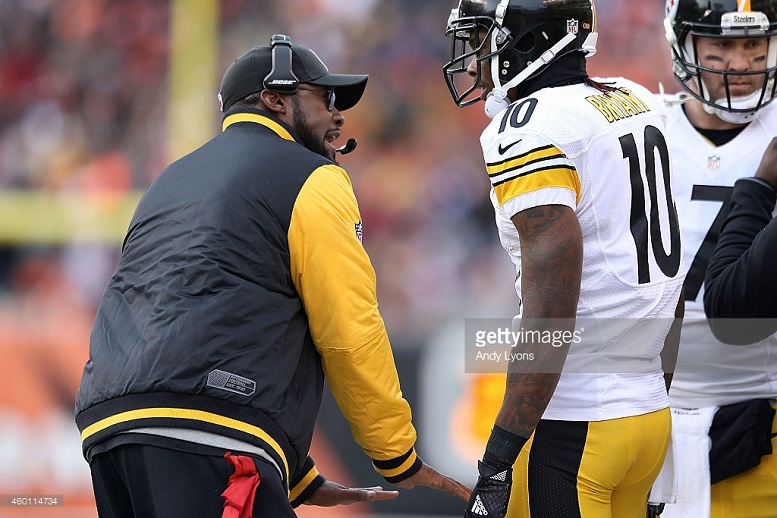 One thing that Steelers Head Coach Mike Tomlin is known for is turning what some see as mountains into mole hills. It is pretty frequent that he is bombarded with questions that would make it seem as though a very serious issue is being addressed, when, in actuality, to paraphrase the coach, it really isn’t high on the damn agenda.

So he walked into yesterday’s press conference knowing that he would have to address wide receiver Martavis Bryant’s post-game comments on social media that quickly went viral, even though he deleted them, seemingly calling out rookie teammate JuJu Smith-Schuster and giving life to the report that he wanted to be traded.

While Tomlin characterized the whole issue as “somewhat of a distraction” only because he had to field questions about it, he did say that he would speak to Bryant and that he would reign down his discipline; so the question then is in what form that discipline will come.

It could be anything, really, from a suspension for conduct detrimental to the team to a simple order to say off of social media. Mike Mitchell had to be told to get off of Twitter and other apps early in his tenure with the Steelers because he lashed out in frustration at people during his injuries.

Tomlin did say that what he has said away from the team—namely, on social media—has presented a different set of information than he and the rest of the team have been given while speaking with him, so that could play a factor.

What should the punishment be? That isn’t for me to say, and, really, isn’t my place. I don’t even have enough information to venture a fair wager. But don’t let that stop you. If you were Tomlin, how would you handle Bryant—noting that he said that he is not available for trade?