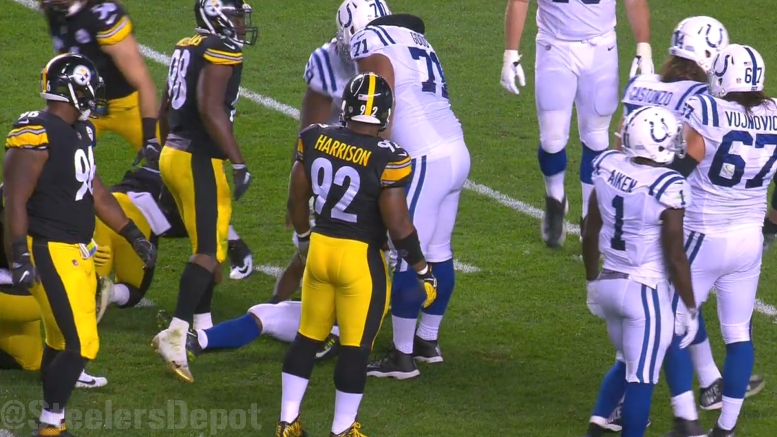 With it coming out yesterday that the Pittsburgh Steelers have already ruled out starting right outside linebacker T.J. Watt for Sunday’s game in Chicago against the Bears, it almost begs the question, doesn’t it?

Is James Harrison going to play this week, and if so, for how long? The 39-year-old former defensive player of the year did not even take the field on Sunday, and in the season opener he still managed to log just four snaps, despite the absence of Bud Dupree for that contest.

Even with Watt missing the entirety of the second half in the Steeler’s previous game, that still did not get Harrison on the field, although Arthur Moats did log a couple of snaps for himself—I believe they came at the left outside linebacker position.

While he has been saying—or not saying—the appropriate things regarding his playing status through two games, he did express somewhat of a sense of surprise over the fact that he has seen such little work to date, all the while intimating that he is okay with whatever role the coaches have in store for him.

During the week, head coach Mike Tomlin was asked about the situation and essentially said that the Steelers were favoring Anthony Chickillo at the moment for the simple reason that he has done well while he was in there. He started the season opener in Dupree’s place on the left side, while Harrison is primarily on the right side.

Tomlin also said that he expects that Harrison will have an important role to play at some point in this season and that he will be prepared when he is called upon. So will that come this week?

How hot will Chickillo’s hand be that it would keep last year’s primary starter on the bench for the entire game?

Particularly if the Bears manage to martial off a couple of long drives here and there, it would be hard to imagine the Steelers’ coaches asking Chickillo to go the length of the game, even considering the fact that he played all put four snaps when he started the opener.

It’s really not necessary for them to take that action, and it really wouldn’t hurt to get Harrison a small handful of snaps on a weekly basis, even for just one drive. And admittedly, I do have a feeling that he will see some playing time during tomorrow’s game.