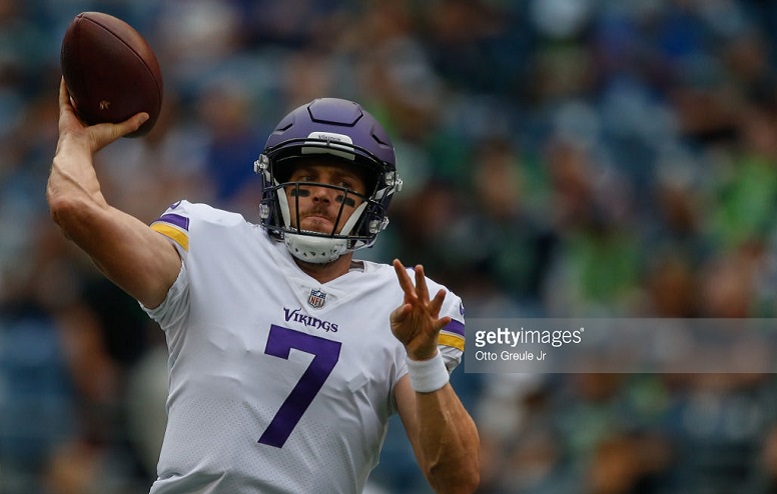 The Minnesota Vikings will start Case Keenum at quarterback Sunday against the Pittsburgh Steelers.

Keenum will start due to Vikings quarterback Sam Bradford being unable to overcome a left knee injury that he apparently suffered at some point during his team’s Monday night win over the New Orleans Saints.

Bradford, who ended the week listed as questionable on the Vikings injury report after being limited in practice all week, went through a short warm-up period at Heinz Field about 90 minutes before his team had to release their list of inactive players. He reportedly barely tested his injured left knee before walking back to the team’s locker room.

A few days ago, the Bradford underwent an MRI on his left knee and that’s the same knee he’s already had surgically repaired twice during his NFL career. In the Vikings Week 1 win over the Saints, Bradford completed 27 of his 32 pass attempts for 346 and three touchdowns.

With Bradford out, Keenum will make his 25th career start on Sunday against the Steelers. Last year, Keenum opened the 2016 regular season as the Los Angeles Rams starting quarterback before finally giving way to first-round draft pick Jared Goff in Week 11. Keenum completed 196 of his 322 pass attempts for 2,201 yards last season and threw 9 touchdowns and 11 interceptions in the 10 total games he played in.

For his career, Keenum has completed 58.4 percent of his pass attempts for 5,224 yards with 24 touchdowns and 20 interceptions. He enters Sunday’s game against the Steelers with a 9-15 record as a starter.

Keenem will be backed up Sunday by Kyle Sloter, who was signed off the Vikings practice squad on Saturday.