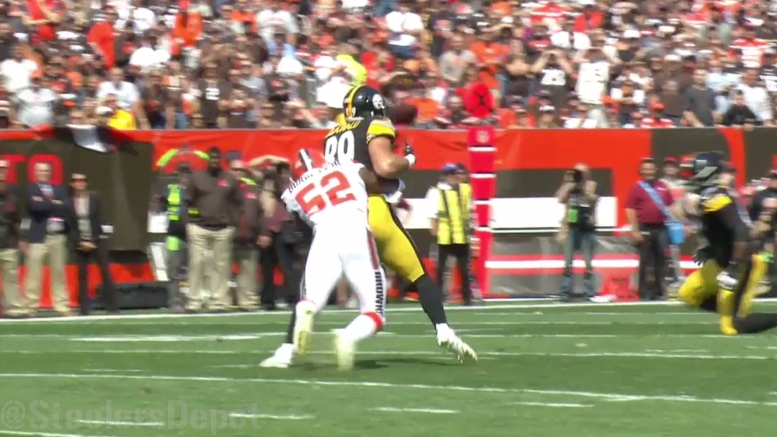 The Pittsburgh Steelers’ newest tight end saw 17 snaps for the offense on Sunday in Chicago. All but one were on passing downs. Vance McDonald was held in pass protection for only a few of those snaps. Yet he failed to see even one target on the dozen or so routes that he ran.

He has seen only one target out of the 35 snaps that he has played over two games so far this season for the Steelers. That target came on a pass thrown short of the sticks on third and 12 on the second drive of the first game of the season. He slightly bobbled the handle before a defender came in to break up the pass.

The former San Francisco tight end averaged 1.67 yards per route run in his final season with the 49ers a year ago according to Pro Football Focus. He gained 391 receiving yards on 234 snaps in route, which ranked 13th among tight ends. Jesse James ranked 38th among 40 qualified tight ends with .88 yards per route run.

The Steelers explicitly brought this player in because they believed that he was better than at least the majority of the players that they currently had available to them at the position, which is significant given that their top three players were all carryovers from last year’s roster.

They also took on his not insignificant salary in order to bring him in. The fact that they were fine with bringing in his contract, which is not structured in the manner that the Steelers’ front office prefers, and doing so via a rare-for-them trade, says a lot about how much they valued him relative to the rest of the tight ends on the roster.

It might then be perplexing as to why he has not seen a bigger role so far in the offense. Or more than one target. But circumstances have not exactly been favorable either. The first game of the season only game a short time before he was acquired about a week and a half prior.

It would not be surprising if it would take some time in order for the team to integrate him into the offense to a level of comfort that would be conducive to featuring him as a pass-catcher. Then he sat out the second game of the season with a back injury, returning on Sunday and seeing many of his snaps only while James was sidelined with an injury of his own.

The Steelers have no as of yet actually gameplanned him into their passing offense, and I think they have some excuses so far. Tomorrow’s game should be more indicative of how they expect to use him.

That should especially prove to be the case after Ben Roethlisberger talked openly about needing to fixate less on Antonio Brown and to more often take the pass that the defense is giving him. Both of those changes would be more conducive to tight ends coming on the receiving end of passes.