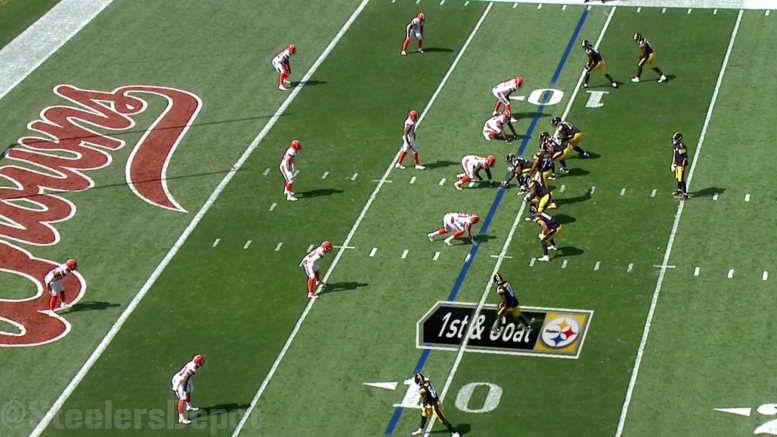 One of the main storylines coming out of the Pittsburgh Steelers’ season opener on Sunday was the sudden usage of the four-receiver set as a proactive piece of their gameplan, which is something that they did not even show at all during the preseason. Though it was not a great surprise, given their investment at the wide receiver position, there were no prior indications.

A subset within the discussion over the use of four wide receivers has been the fact that the Steelers utilized those targets out of the 01 personnel set, rather than 10, the former indicating the usage of a tight end as the fifth skill position, the latter indicating a running back.

Not that it is abnormal for a team to use a tight end rather than a running back with four wide receivers on the field. But when it is the Steelers, and the tight end is Jesse James, while the running back is Le’Veon Bell, there could be a penchant for raising some eyebrows.

Last season, the Steelers used the 01 personnel nine times the entire season. It was obviously not a staple of their offense. But all nine usages of that personnel package came during the first three games of the regular season, when Bell was suspended. During the postseason, they did not use it at all, but they did use the 10 package twice with Bell on the field out of an empty set.

Now, going back to the 2015 season, the Steelers did actually use the 01 package a total of 18 times between the regular season and the postseason. But, once again, every single instance of its usage came after Week Eight, when Bell suffered a season-ending knee injury. And on the contrary, they used the 10 package six times, though three of those snaps featured a back other than Bell.

What I’m trying to say is that I would not expect it to be the norm that the Steelers favor the 01 package over the 10 package, and I would expect Bell to see snaps on the field with four wide receivers as early as tomorrow at home against the Vikings.

Bell looked rusty as a receiving option this week—or perhaps more accurately he and the offense looked out of sync during the instances in which he was designed to get the ball, which resulted in three incompletions on six targets—but I would not anticipate that being a prolonged issue.

After all, he only had six days to prepare for the game after officially reporting and signing his contract. He will have literally had more than twice as long since rejoining his teammates by the time he takes the field tomorrow.