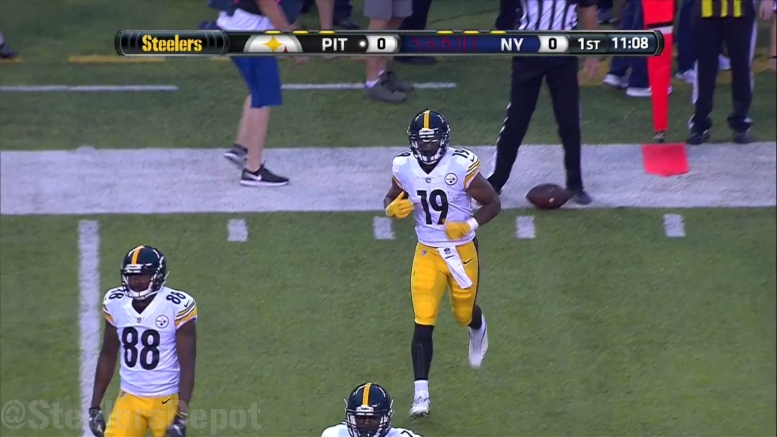 The Pittsburgh Steelers selected wide receiver JuJu Smith-Schuster in the second-round of this year’s draft and because of that, it’s not hard to imagine him becoming a regular contributor on offense during his rookie season. With that said, the USC product might just open the 2017 regular season on the team’s inactive list this Sunday when the Steelers play the Cleveland Browns.

While Smith-Schuster showed some promise during Steelers training camp as well as the preseason, he still missed a lot of time due to minor injuries. In fact, he played all off 44 preseason snaps on offense and just three on special teams in the three games he dressed for.

In 2014, the Steelers took it slow with then-rookie wide receiver Martavis Bryant as he was inactive for the team’s first six regular season games that year even though he played in all four preseason contests. When Bryant was finally allowed to dress and play in the team’s Week 7 game against the Houston Texans, he caught two passes for 40 yards and a touchdown in 22 offensive snaps played. From that point forward he dressed for every game and ended the regular season with 26 receptions for 549 yards and 8 touchdowns.

The Steelers enter the 2017 regular season with a seemingly stacked wide receiver group that includes Antonio Brown, Eli Rogers, Bryant and Justin Hunter. Veteran Darrius Heyward-Bey also made the team once again albeit mostly because of his ability to contribute on special teams.

While Smith-Schuster could ultimately dress as a sixth wide receiver against the Browns, it’s important to remember that the Steelers need to make seven players inactive 90 minutes ahead of that game kicking off.

As we sit here on Tuesday, three of those seven inactive players on Sunday are likely to be quarterback Joshua Dobbs and offensive linemen Matt Feiler and Jerald Hawkins. One linebacker might be inactive on Sunday and if defensive tackle Daniel McCullers sticks on the 53-man roster until Sunday, he would be a prime candidate for the inactive list as well. That leaves two inactive spots that need top be filled.

In conclusion, the Steelers might decide to sit either Hunter or Smith-Schuster on Sunday and it won’t be surprising if it’s the latter. If the rookie wide receiver doesn’t ultimately dress for the opener, I doubt he’ll remain on that list as long as Bryant did during his rookie season. He just might need a little more seasoning before being allowed to contribute on offense.

For what it’s worth, Smith-Schuster is listed as the team’s top kick returner on their most recent depth chart and if that holds true, that might be his ticket to dressing against the Browns.