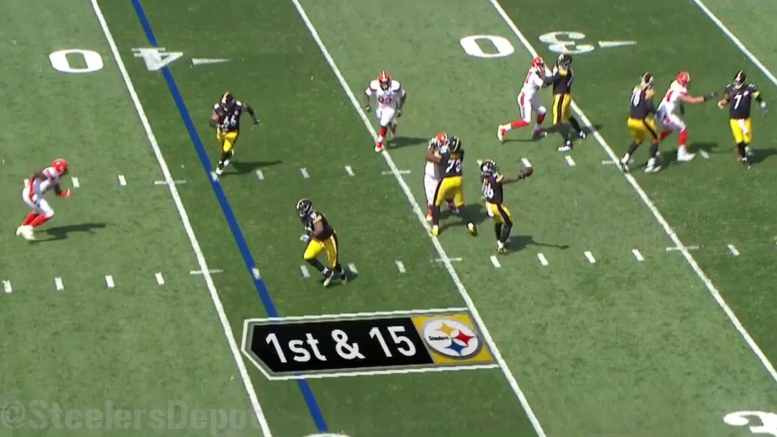 Was the supremely lackluster performance from Pittsburgh Steelers running back Le’Veon Bell solely a product of his own shortcomings? Certainly not. There were many areas in which the running game struggled yesterday, as the blocking, including from the tight ends and wide receivers left much to be desired, upon initial inspection.

Was at least some of his performance attributable to the fact that he has only practiced with his teammates a few times this year, or even been around the offense and digesting it, establishing the ongoing process that is chemistry with his quarterback and his blockers? I would think so.

All told, the two-time All-Pro was limited to just 32 rushing yards, albeit on only 10 attempts. He also added 15 more yards on three receptions, but even that statistic has a second layer to it to be explored, because he and quarterback Ben Roethlisberger did not have an easy time making connections in the passing game.

On top of his work as a rusher and pass catcher, he also managed to draw a penalty for what the officials called a peel back block, although to be fair, I think the penalty was actually supposed to be on Roosevelt Nix, and it was incidental, as the fullback slipped.

It actually took all the way until the final play of the first quarter in order for Bell to even get a touch in the game, and it came on first and 10 from the Steelers’ 25. Set up with two blockers on the field—Vance McDonald and Xavier Grimble, no Jesse James—neither Grimble nor wide receiver JuJu Smith-Schuster were able to connect on their reach blocks, allowing penetration and contact in the backfield, and Bell was lucky to dive back to the line of scrimmage for what otherwise could have been a loss of at least three yards.

Bell’s second would-be touch came a few plays later on a designed screen, only Ramon Foster was blocked into him and by the time he got around for the pass, he didn’t have the opportunity to adjust, spinning to face the wrong way. It’s not clear it would have been a very successful play anyway.

He did follow that up with a three-yard carry, but he was never able to get going throughout the day, even considering his limited touches and opportunities. He got stuffed on third and one early in the second quarter.

There were some bright spots. He made one defender miss on a six-yard reception, and at the end of the day, it was his slippery 15-yard run with 2:28 remaining that ultimately clinched the game. He had another double-digit carry called back by a hold.

This obviously wasn’t the start that almost anybody on the Steelers wanted to get off to, and I’m sure the offensive line is as hard-up about it as anybody. But it is one game, and a game that hopefully knocked off some rust.