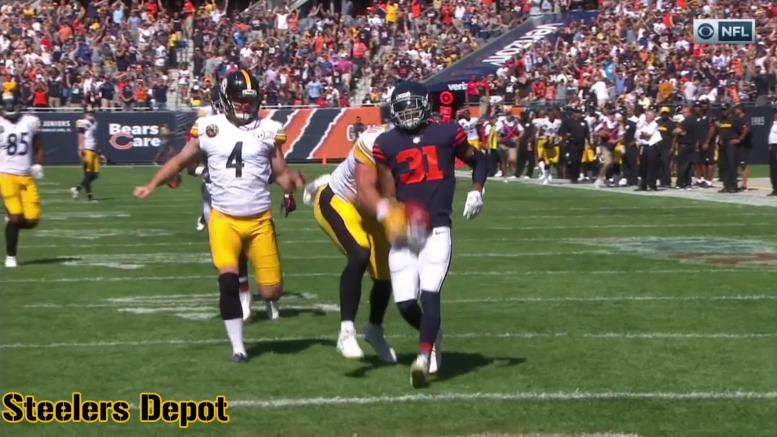 One of the most unusual plays of the Pittsburgh Steelers’ early season—really, of the NFL season so far—was the blocked field goal at the end of the first half as time expired. The Bears were able to block it with pressure around the left wing.

The ball proceeded to bounce directly to the Bears defender on the opposite side of the field, who was able to scoop it up and run with it, setting himself up for an easy touchdown, only to inexplicably let up ahead of the end zone, which led to Vance McDonald chasing him down from behind and knocking the ball loose.

Adding to the oddity of the play is the fact that they player was cornerback Marcus Cooper, who just so happened to be a draft pick in the 2013 class for the 49ers—the same class as McDonald. San Francisco took McDonald in the second round with the 55th-overall pick, while Cooper was their last pick in the seventh round, the 252nd pick in the draft.

Cooper actually did not make the 49ers’ roster, but as a draft classmate, he and McDonald got to know each other well regardless. And while said he didn’t see him after the game, I’m sure he’s talked to him by now.

“I didn’t really know what Coop was thinking” by slowing down on that play, he told reporters after the game. “I played with Coop out in San Fran. He’s gonna be looking that one over again and wishing he had it back for sure”.

“As a wing, you never want to hear the double thud” of the ball off the kicker’s foot, then off of another player, “and so I knew there was pressure coming from the other side, my job is just to kind of stop the bleeding if something really bad happens, so that’s kind of what I was thinking”, he recalled of the play.

McDonald admitted as much, saying that “as an offensive player you’re not really in that position often, pursuing someone, so it just kind of makes running easy when you have someone to catch”. He added, “I was just surprised he stopped and gave me an opportunity to save something really bad from happening”.

“I just hit the ball as hard as I could, I have no idea where it went”, he said, as he tomahawked the ball out of his former teammate’s hand. The ball proceeded to trickle into the end zone where bodies went diving for it. Punter Jordan Berry, the holder on the play, was down there to punch it out of the end zone, which drew an illegal batting penalty—such a rare call that the officials barely knew what to do.