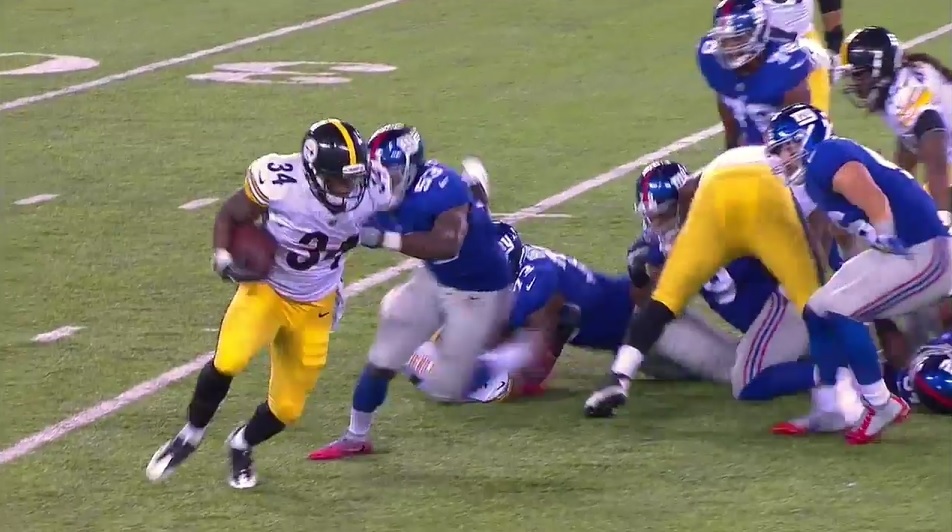 History says free agents signed by Kevin Colbert before June 1st are all but guaranteed to make the team. Knile Davis found out he was exception.

He joins Kevan Barlow as the two pre-June 1st signings (historically, when the compensation calculation ended) not to make the team. Justin Hunter could be the third but that was always seen as a special exception, the insurance policy to Martavis Bryant and a league that will hold out the carrot for as long as possible (and still are).

So it takes a lot to get the ax after Colbert takes you under his wing. While Davis, and Fitzgerald Toussaint, are well-rounded players, neither had a standout trait to make the team. Toussaint’s success as a kick returner was awfully limited, and I’m being generous, and he was just an ok running back. A tough guy with a little burst but no long speed or power.

Davis showed a little more of that. I thought at least, and that’s why I figured he was going to make the roster in addition to that history. But there’s no question he didn’t have a special trait as a runner and his vision was questionable. That’s best summed up by Ben Roethlisberger’s reaction to Davis bouncing this second and one run.

Juxtaposed to that is Terrell Watson. I don’t want to delve into him too much, I’m sure he has been/will continue to be written about today on the site, but you knew the type of runner he is. Downhill, baby. Davis didn’t have that trait. What kind of runner was he? The get-what’s-blocked runner? Ho hum.

And what else he showed, competent in pass protection, out of the backfield, wasn’t enough to make up for it. Kick returns in the preseason are tough, it’s hard to get the timing of the operation down, but he didn’t shine there either. There’s a separate question about who exactly will be returning kicks, Sammie Coates and someone to be announced at a later date. But that’s what Davis was brought in for and he didn’t deliver.

The bottom line is this. It takes a lot for a Colbert free agent signing to fail to make the roster. A combination of the person brought in not living up to expectations and someone off the radar coming on it. It’s actually a replay of the Barlow situation. Brought in for 2007, Barlow lost out to UDFA Gary Russell, a bigger, power-type back. This time around, Davis lost to Watson, not a UDFA, but a “small” name guy initially who was a downhill runner.

History repeats itself. For Davis, he’s not ending up on the right side of it.