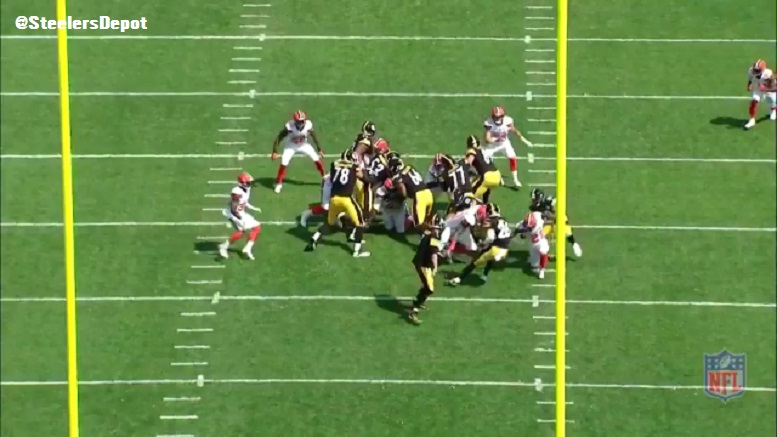 If you own Pittsburgh Steelers running back Le’Veon Bell in any of your fantasy football leagues, don’t go dropping him just yet. Sure, Bell’s Week 1 output was dismal and especially his 32 rushing yards on 10 carries, but in my opinion, he had a lot of help when it came to him producing so poorly on the ground Sunday against the Cleveland Browns.

In short, Bell didn’t have a lot of running room in Sunday’s win over the Browns as not only did the interior of the Steelers offensive line do a poor job of blocking, but a few tight ends and wide receivers as well. A great example of this can be found on Bell’s very first carry of the game. He did good to get back to original line of scrimmage on this play.

Of Bell’s 10 rushes against the Browns, 8 of them went into the books as being “unsuccessful” runs. Those 8 runs, by the way, resulted in a paltry 12 yards gained but even that number doesn’t tell the whole story.

According to my review of the all-22 tape from Sunday’s game, Bell had 19 yards after first contact on those 8 runs. You dont have to be a math major to figure out that those after contact yards were a result of him having company in either the Steelers backfield, or right at the original line of scrimmage.

Was Bell’s timing off a tad due to him missing all of training camp and the preseason? If it was, you really couldn’t tell it on his 10 carries. In fact, on one unsuccessful run that gained 5 yards on 2nd and 9 from the Browns 9-yard-line, Bell looked like his usual self and he even took a nice pop from a Browns defensive back at the end of it.

According to Pro Football Focus, Bell averaged 3.2 yards after contact against the Browns on his 10 total carries and that average was fifth-best for Week 1 when compared to the 34 other running backs who had 10 more carries.

Not that it means much, but Bell had two runs totaling 19 yards that were negated because of holding calls on center Maurkice Pouncey and wide receiver JuJu Smith-Schuster. Would he have gained those yards had the holds not occurred? We’ll never know but the call against Smith-Schuster was questionable and in my opinion, Bell still would have gotten to the edge. I will let you decide as that play is below.

The easy narrative for Bell’s poor showing of running the football on Sunday is that he was out of sync with the entire offense due to him sitting out all of training camp and the preseason. Personally, I think his lack of total carries on Sunday, his first of which came with 17 seconds remaining in the first quarter, combined with poor blocking up front was the main culprit.

We’ll see if Bell can rebound this coming Sunday at home against the Minnesota Vikings. If he doesn’t, I still wouldn’t drop him from your fantasy football team if I were you.