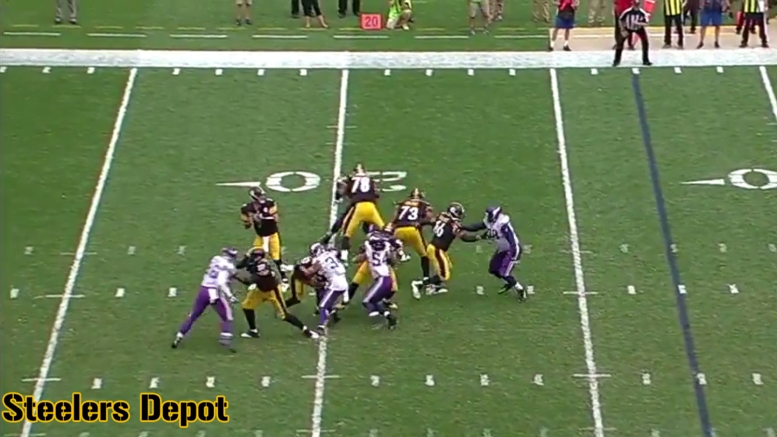 There has been some debate as to whether or not Le’Veon Bell is full on the same page with the rest of his offensive teammates, but the Pittsburgh Steelers running back hasn’t necessary been given the greatest opportunities to succeed.

Sure, maybe has failed to hit a hole or two here and there, or failed to break a tackle in open space on a reception that would ordinarily be light work for him, but his overall level of production to date could certainly be worse from a qualitative analysis of his opportunities.

One area that hasn’t been discussed much, though is in his work as a pass protector, which is a pretty big part of his job. On Sunday, he stayed in on a full pass protect assignment more than a quarter of the time, and that doesn’t include a standard chip or a free release when he has nobody to block.

His earliest blocking assignment came on the third play of the game, the Steelers facing a third and eight. Set in the right sidecar, he picked up the blitzing linebacker coming off the edge. He seemed to do it a bit nonchalantly, but he still did his job.

Much later in the quarter, he was on Ben Roethlisberger’s left when he tried to help Alejandro Villanueva chip Everson Griffen. It didn’t really help matters with the pass-rusher spinning inside of the left tackle and finishing off the sack.

Now, late in the second quarter, running the two-minute offense, he got a lot of work. On the second play after the two-minute warning, he did an excellent job of scanning the field to read where the blitz was coming from. With a stunt up the middle and a blitzing linebacker in the same gap, it was actually a well-designed play, but the protection was better.

Two plays later, his responsibility was far less nebulous, the middle linebacker simply coming right up the middle, but Bell was there to meet him at the line of scrimmage. He got a little push at first but ended up on the ground at Roethlisberger’s feet. It turned into a 12-yard reception.

Jumping ahead, a rare pass out from under center on the first play of the fourth quarter. Off of super lazy play action, Bell wasn’t able to square up a hit on the safety, but at left got enough to left Roethlisberger scramble out of the picket and hit his throw. And to be fair to the back, Harrison Smith made a nice move there.

While he can probably still use some improvement in this area of the game as the season goes on, I do think Bell’s work in pass protection through two games has been a plus. His blitz recognition in particular has been an asset.