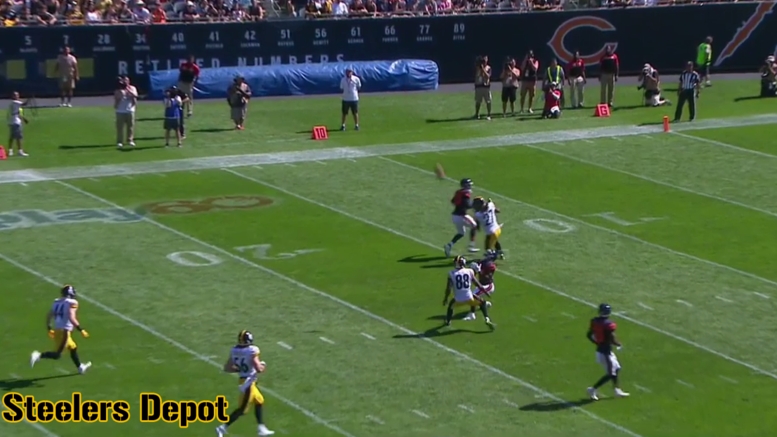 Many are hesitant or in outright refusal to admit that Darrius Heyward-Bey holds a starting position for the Pittsburgh Steelers. He is a starter on special teams and his primary function is as the right gunner on the punt coverage unit, among other responsibilities.

It is for this reason that I believe that he is going to continue to dress in spite of recent reports that the Steelers intend to activated Justin Hunter in place of somebody else. The frontrunner for the player most likely to take his spot would seem to be Eli Rogers after it was also reported that Antonio Brown is going to go back to returning punts.

Rogers did a fairly poor job of returning punts over the course of the first three games; in contrast, Heyward-Bey has done a typically excellent job of providing coverage on punts as his primary of several roles on special teams.

The Steelers punted six times on Sunday and Heyward-Bey induced a fair catch on four of them. Because induced fair catches is a fairly amorphous concept and not one that is statistically catalogued officially, his impact on special teams is often undersold.

It is because of things like this that I’ve decided to provide more coverage to special teamers this year, with a weekly special teams report and a film room feature from every game. For the second time in three weeks, Heyward-Bey gets the highlight reel again.

On the first punt of the game, Jordan Berry punted from his own 46, sending it 46 yards down the field, where Heyward-Bey stood waiting in front of the returner, Tarik Cohen, who signed for a fair catch inside the 20-yard line. Notice that he even managed to get the jammer’s hips turned as he pulled back inside.

Toward the end of the quarter, he also got work as a jammer. He is always on the punt return unit, but is not always asked to play this role. Here, he paired with Artie Burns to slow and control the Bears’ left gunner.

Early in the second half, Heyward-Bey got Cohen to signal for a fair catch yet again, and it is worth pointing out that yet again this punt was sent to the opposite side of the field. This time he raced by the jammer to the outside, winning with pure speed.

His speed won him yet another fair catch in the fourth quarter, this one on a punt of 50-plus yards.

Cohen showed how deadly and elusive he could be on offense, but when it came to special teams, the Steelers had him controlled, and that was in large part thanks to Heyward-Bey.