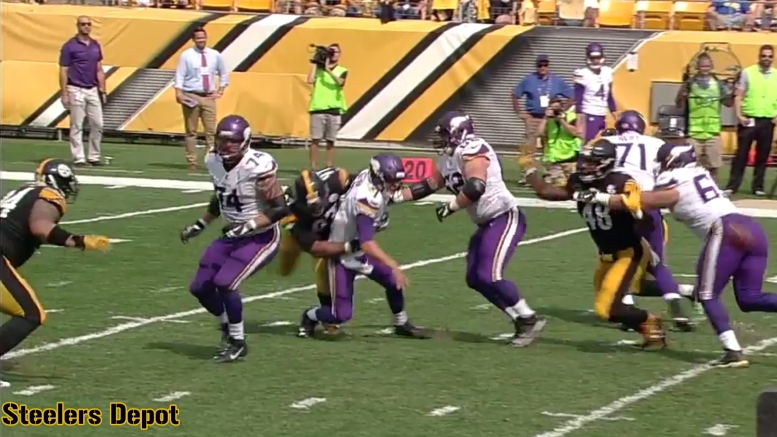 Though he didn’t record three sacks in the game like he did in Week Four a year ago, defensive end Cameron Heyward’s performance on Sunday for the Pittsburgh Steelers was surely one of the better displays of his career, which is notable considering that his last season ended with a pectoral injury.

The seventh-year lineman looked no worse for wear, however, taking on an admittedly overmatched Vikings interior front, and he had an especially fun time working against their left guard, who probably grew weary of seeing the number 97 lined up across from him.

Late in the first quarter, he completely negated the guard’s attempt to wall him off on a zone run off his back side, Heyward crossing his face and nearly making the tackle himself at the line of scrimmage. Dalvin Cook was able to cut back a bit but was then quickly met by other defenders for a short gain.

Early in the second quarter, working before the snap as a five-tech, he went right after the guard and drove him into the backfield, quickly flinging him away to free himself in making the tackle on the running back near the line of scrimmage.

Later on the same drive, with the Vikings threatening and in field goal range, the defense was able to get pressure on three straight passes to force a series of incompletions. Second down was Heyward’s turn, on which he simply was too quick through the B Gap for the left tackle to reach him, giving chase to Case Keenum until he was able to scramble out of the pocket and heave the ball out of bounds.

Minnesota late in the first half was looking promising again, set up with a second and four near midfield, when Heyward, as a seven-tech in their ‘over’ front on the tight end, proceeded to dominate the tight end, rushing him into the backfield and putting him on the ground before leading a tackle party to drop Cook for a loss of three. He previously had a tackle for a loss of four yards as well.

His impact was certainly not limited to the first half, either. In fact, he sullied the Vikings’ opening drive of the third quarter when he was able to get around the outside shoulder of the left guard and put pressure on Keenum, hitting him and making him throw the ball into the dirt to avoid a sack.

If this is the Heyward that the Steelers were missing last year—and they have barely even seen the continued growth of Stephon Tuitt—then opposing offensive lines are going to have a hard time this year.