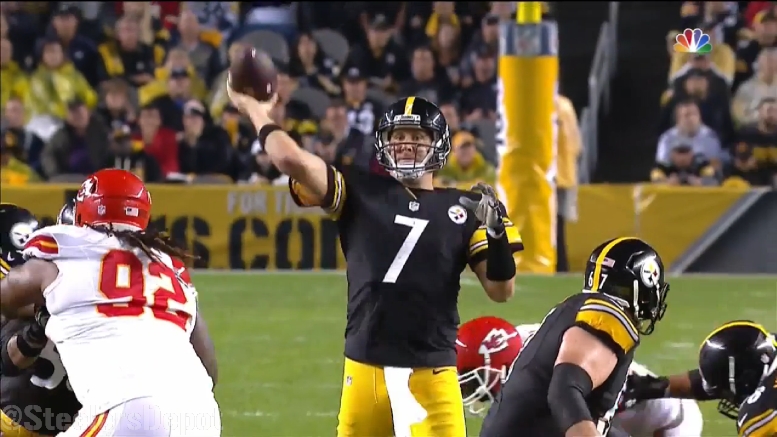 The Pittsburgh Steelers enter the 2017 season knowing full well that this year could be the last for quarterback Ben Roethlisberger, their first-round pick in the 2004 NFL Draft. And they are hoping that he could have one last Super Bowl run in him after leading the team to three in the past, winning two of them to make the Steelers the winningest franchise in Super Bowl history.

It is obvious that Roethlisberger’s success is critical to the Steelers’ success this season, and frankly I don’t even want to think about what will come next after he retires. But that doesn’t mean it wouldn’t be nice if he has a bit of a better season than he did a year ago.

Pro Football Focus seems to think that he will, placing him sixth in their 2017 pre-season quarterback rankings after he tied for the 11th-highest quarterback grade in their metrics from last season. For perspective, he placed first in their metrics the year before, higher even than Tom Brady.

Entering the 2017 season, however, PFF has him behind—naturally—Brady at the top, followed by Aaron Rodgers, Drew Brees, Andrew Luck, and Matt Ryan, in that order. Only Brady and Rodgers make up the Elite tier, while the rest—in addition to Russell Wilson and Philips Rivers—make up the ‘Upper-Level Starter’ tier.

They do include some interesting numbers from last season. His adjusted completion percentage, for example—a statistic meant to adjust for things like dropped passes—was 72.7 last year, which was good for just 19th in the league among qualifying quarterbacks.

His passer rating facing pressure was just 69.8 a year ago, 16th in the league, which is surprising considering that his career numbers against pressure are very good. His 79.8 rating against the blitz last season ranked even lower at 24th.

While he had the eighth-best passer rating on deep throws (110.4), his intermediate passer rating (91.6) ranked 14th, while his short passer rating (92.8) ranked 24th. On the other hand, another positive statistic is his ‘big throw percentage’ of 5.7, eighth-highest in the league. Big-time throws are those that they grade very highly, but obviously apply to very skilled throws.

My biggest concern last season came with ball security, however. While he only ended up with 13 interceptions a year ago, tied for 12th-most in the league, a significantly higher number of passes could have been intercepted but were not as a result of defensive failures. PFF indicates that 4.9 percent of his throws were ‘turnover-worthy’ last year, ranking 27th in the league.

By more conventional metrics, Roethlisberger ranked 17 in passing yards, 11th in yards per attempt, sixth in touchdown passes, 14th in completion percentage, and 11th in quarterback rating. While his touchdown numbers were good, I think by either conventional or ‘advanced’ measures it would be fair to argue that he could definitely play better this year.