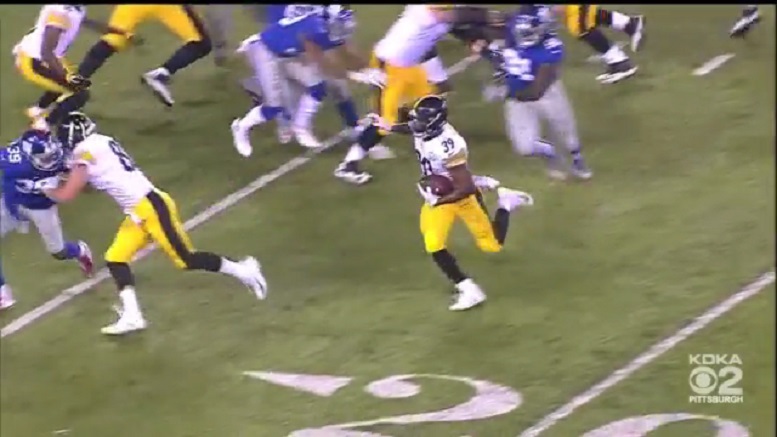 As is usually the case in a Pittsburgh Steelers preseason opener, several young and relatively unknown players had good initial showings. The Steelers 2017 preseason opening win over the New York Giants included a few such instances and head coach Mike Tomlin wasn’t shy about praising a few of those standout players after the game.

While Tomlin had generally positive things to say about draft picks T.J. Watt and Joshua Dobbs after the win over the Giants, he also noted that he was pleased with a few other young players on the roster. The three players that Tomlin highlighted were tight end Jake McGee, cornerback Mike Hilton and running back Terrell Watson.

“It was really positive, Tomlin said of Watson, a 6-1, 240-pound-ish running back out of Azusa Pacific. “But it’s not unlike what he’s shown us on the fields of Latrobe. He’s got a distinguishing characteristic. He’s a one-cut, downhill guy and did some nice things tonight.”

Watson, a former undrafted free agent in 2015, rushed for 44 yards and a touchdown on 10 carries late in the Steelers Friday night win. He has reportedly had a solid showing so far in training camp and currently appears to be a solid candidate to ultimately make the team’s practice squad if he fails to make the final 53-man roster.

As for McGee, who was signed by the Steelers after the start of training camp, Tomlin indicated he had a nice showing Friday night as well.

“It might not show in terms of statistics, but just guys acclimating themselves to play,” Tomlin started. “Jake McGee, for example, guys you don’t know a lot about, contributed on offense and special teams. Again, stats might not bear that out, but just from a coach’s eye, just a lot of positive things to look at from guys.”

McGee, who played his college football at Florida and Virginia, entered the NFL originally in 2016 with the Carolina Panthers as an undrafted free agent. He has since spent time with the Oakland Raiders and Los Angeles Chargers. While he failed to register any stats Friday night, McGee delivered a few nice blocks in the running game and especially during the late touchdown run by Watson.

“I thought those guys did an awesome job of blocking, specifically on the touchdown,” Tomlin said. “I thought Jake McGee, who I mentioned earlier, did a nice job of leading the way.”

As for Hilton, who entered the game Friday night with high expectations being as he’s stood out so far during training camp, Tomlin was pleased with his play against the Giants as well.

“Yeah, and again, like some of the others we talked about, it wasn’t too big for him,” Tomlin said of Hilton, a former undrafted free agent out of Mississippi. “Forget the play, I just thought the awareness and the communication, and stuff in-game, was no different than a practice setting and that’s encouraging.”

Hilton played quite extensively Friday night both on defense as a slot defender and on special teams. He finished the game with four total tackles and that included a sack. He also recovered a fumble on a punt. Hilton is looking to make the Steelers 53-man roster as either a fifth or sixth cornerback.