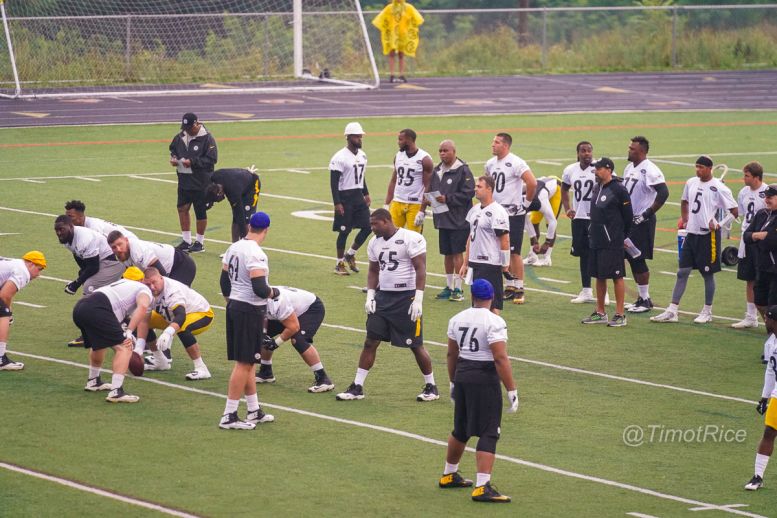 We have hardly talked about him at all, but perhaps we should, because second-year offensive lineman Keavon Milton (#76) has been lining up with the Steelers’ second-team line all throughout training camp. That should at least put him in the competitive race for a spot on the practice squad, which is not insignificant.

It’s quite possible that the two of them team up again this year for spots on the practice squad, which may not actually be a bad idea. Both of them are capable of playing tackle and guard. The Steelers even list him as a tackle, but he has been playing guard all throughout camp.

At 6’4” and 320 pounds, he really is pretty much in that grey area between interior linemen and the bookends, neither a physical strength nor liability. Anyway, it has not up to this point seemed to be an obvious advantage or disadvantage for him.

Not that he has necessarily been performing spectacularly. I recall one of Alex’s training camp entries in which he mentioned Milton several times being on the wrong end of Tyson Alualu. But hey, Alualu is a good player. And Alex did also mention seeing him get work on special teams.

The man has been around the block. Originally undrafted in 2013 out of ULM, he was released in final cutdowns by the Saints, but claimed off waivers by the Browns. He was active for eight games that year but did not make the team in 2014.

He time spent that year with the Seahawks, dressing for one game, and since then has spent time on the practice squads of the Patriots and Cowboys before joining the Steelers’ a few days after Dallas let him go. And here he still is, almost 10 months later.