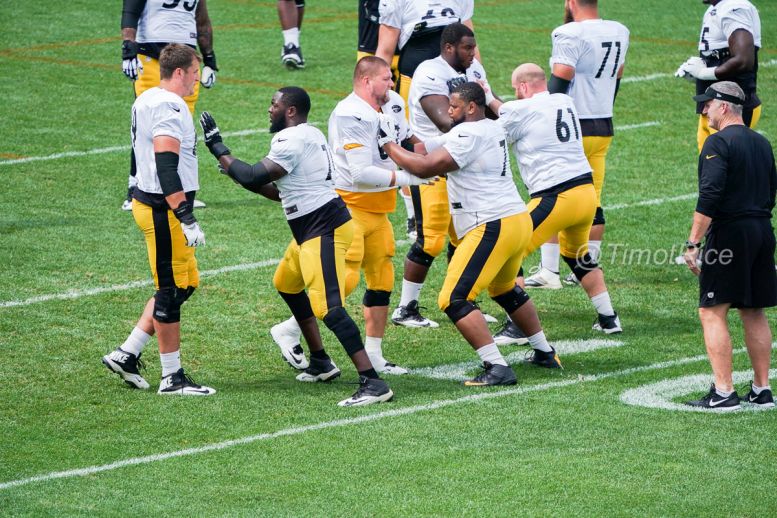 Now that the 2017 Pittsburgh Steelers training camp has concluded, we’re recapping everything that went down over these past 16 practices. We’ll break down each play, position-by-position, with final winners and losers at the end. Moving onto the offensive line.

Alejandro Villanueva: I think 15 years from now, when T.J. Watt gives his Hall of Fame speech, and reflects on his “Welcome to the NFL” moment, he’ll think back to his first camp, getting killed by Villanueva practice after practice. Villanueva’s size and unique athleticism for that size gave Watt fits throughout and the rookie never really figured him out. But it was an iron sharpen iron type moment, the Burns vs AB matchup that wasn’t touted the same way but works in similar fashion.

Villanueva was as solid as ever and avoided any long-term concussion, or maybe a concussion entirely, suffered at the Heinz Field practice. Really don’t have anything bad to say about the work he put in throughout.

Marcus Gilbert: Ho-hum, another solid camp for Gilbert. There were moments where he did look bad, getting steamrolled by Arthur Moats in a one-on-one drill. But beyond the occasional blip, Gilbert – like Villanueva – is as steady as ever. Still unreal how hard ht worked to transform and change his body from sloppy (fat) to as svelte looking as anyone in the league. Think it’s helped him stay healthy and definitely will take pressure off his joints.

Maurkice Pouncey: Wound up missing half of training camp with an apparent cut on his right leg. And he was always held out of certain periods, like OL/DL. So honestly, you kind of have to give him an incomplete. Centers are tough to watch in team, too, when you’re observing from the sideline. His athleticism is still at an elite level, one of the few players who can pull in space and get downfield like he’s a guard.

Ramon Foster: He wound up getting the final three days of camp off, well deserved rest for the veteran of the line. But his camp was, as is the theme with the known products of this line, solid. He is one of the few guys who make handling Cam Heyward look graceful and Foster’s 340 pound frame is a pain for finesse players to go around. He’s a leader and brings boundless energy day in, day out, shouting out teammates and leading the Steelers through the stretch line.

David DeCastro: One of the more underrated camp battles, and I know I have said this in the past, is DeCastro vs Stephon Tuitt. They’ll split wins and losses but make each other better. DeCastro is a great puller who can get square out in space. That no-nonsense, high-intensity attitude that meshes perfectly with Mike Munchak.

Jerald Hawkins: Ok, now we get into some of the backups. And they didn’t sparkle as bright as the starters. It was an up and down camp for Hawkins. Frankly, he didn’t take the step forward I thought he would. But there is an excuse. Missing nearly his whole rookie year, Hawkins had to get back on that moving train. Some rust early and Hawkins story is a guy who has always had the physical tools but hasn’t been healthy enough to get the reps to hone his craft.

To his credit, Hawkins didn’t miss much time this year, sans for one excused absence mid-way through camp. But his play was rocky. Not always able to seal the edge and I didn’t see anything special in his run blocking either. Just don’t think he’s totally comfortable out there yet. His performance against the New York Giants, which to be fair, could stem from a number of issues, look abysmal. He’ll bounce back but it’s clear Chris Hubbard is the first tackle off the bench should he be needed.

Chris Hubbard: Hubbard is trusty, Swiss Army Knife you’ve had since you were in Boy Scouts. I think most Steelers’ fans have warmed up to his value and are content with his play when pressed into action. Hubbard can truly play all five spots. Some better than others, he’s a natural tackle (what he played at UAB) but he’ll serve as the third string, emergency center. That’s what happened when B.J. Finney left practice on Day 15.

He lacks elite power at the point of attack as a run blocker but is light on his feet and shows leverage/arm extension. Can’t say enough about how important his flexibility is to the team…and how hard it is for a linemen to feel comfortable playing anywhere. Much harder than it sounds.  Even left guard versus right guard is a HUGE difference.

B.J. Finney: Finney saw most of his work filling in for Pouncey at center. Finney admitted he is a better guard than center and yeah, story checks out. An objectively difficult camp for him at the pivot. Struggles when covered by the nose tackle to generate a push off the line or reach block the playside nose tackle. Javon Hargrave whooped him in team period and arguably bettered him in one-on-ones, to, though Finney seemed to fare better.

He’s still got a lot of promise and like I said, better at guard, but this camp was a learning experience.

Matt Feiler: Definitely a pleasant surprise though it’s wrapped around the realization he is no longer practice squad eligible, making this preseason sink or swim for his Steelers’ future. He got work with the first team on the final day (granted, Foster was out) a sign the team is as happy with him as I hinted at throughout camp. He’s a big body at somewhere around 330 pounds with strength to win the point of attack. He stays square as a blocker, a foundational element for Munchak, with better feet than you’d expect and the ability to move laterally. While he worked exclusively as a guard in camp, he has a background as a tackle too.

He’s done everything possible to create a spot on the roster as the 9th offensive linemen. Think the odds are still against him making it but the door is cracked. Three more games to bust it open.

Keavon Milton: Said it on a recent podcast. All due respect to Milton, who I’m sure has worked hard to transition from tight end to guard over his career, he was arguably the worst linemen in camp. Not much of an athlete. Lacks strength in the run game. Failed to get arm extension and show a strong punch. The Giants killed him with bull rushes. Nothing special about his game. After a decent start in camp in one-on-ones, he regressed to the mean and looked below average the rest of the way.

To his credit, he was available, dressing for all 16 practices and not missing a rep. Practice squad eligible but I don’t expect him to land there. Only things helping him is Feiler’s ineligibility and the fact no one else who is eligible stuck out in a big way.

Ethan Cooper: One of the most highly touted UDFAs in a dull class, Cooper was a bit of a disappointment. Maybe that’s on us for trying to hype somebody, anybody up. He is a human fire hydrant, short, squatty, with a Kardashian-lower half. He does move better laterally than you’d expect and plays with tight hands and a decent enough punch. Has the power to kick out the EMOL when asked to pull. Not a lock for the practice squad but I like his odds.

Kyle Friend: He saw more reps than expected with all the time Pouncey missed, elevating Friend to second team center. His uses his lack of size to his advantage and is able to create leverage but has minimal functional strength and is a below average athlete. Struggles with defensive linemen who can convert speed to power. A little bit of versatility, starting camp by playing guard until Mike Matthews tore up his knee. But nothing special about his game, at least, in what I saw.

Lucas Crowley: Brought in after Matthews went to injured reserve. Started to work in team as the third team center the last few practices. Honestly didn’t watch him enough to have a fair evaluation but I promise his game isn’t anything to go crazy about.

Brian Mihalik: Another guy I am disappointed in. Mihalik had a good camp last year, knowing he was making the switch to from defensive end to offensive tackle. He’s built like Villanueva (and they’re roommates), but lacks the functional strength and heavy hands that makes Villy so effective. Too often, guys easily get into his chest and walk him back and he lacks the lateral movement to seal the edge as consistently. He’s not a terrible athlete for the position, and I’ve seen him mirror counters, but his game is still inconsistent and unrefined.

Still worth putting on the practice squad and giving it another year. Just didn’t take the step I was hoping for.

Jake Rodgers: The problem with a guy like Rodgers is how few reps he received. Similar to Cooper, he was relegated to the third team but in Cooper’s case, Pouncey missing lots of time, Foster getting rest, and Finney’s half-day all made for an opportunity for additional reps. Gilbert and Villanueva missed a total of two practices. Same story in the Giants’ game, seeing only a handful of snaps late.

Like others, Rodgers was healthy and available for every practice, a must for any player trying to get noticed. He’s an above average athlete with the length to seal the edge. Gets square as a run blocker and looks to finish. But the speedier/bendier edge rushers can get under him; T.J. Watt gave him fits the few times they matched up.

Again, Feiler not being a practice squad candidate helps his chances but it’s tough to see the team keeping him over Mihalik. Still three games left. We’ll see what happens.