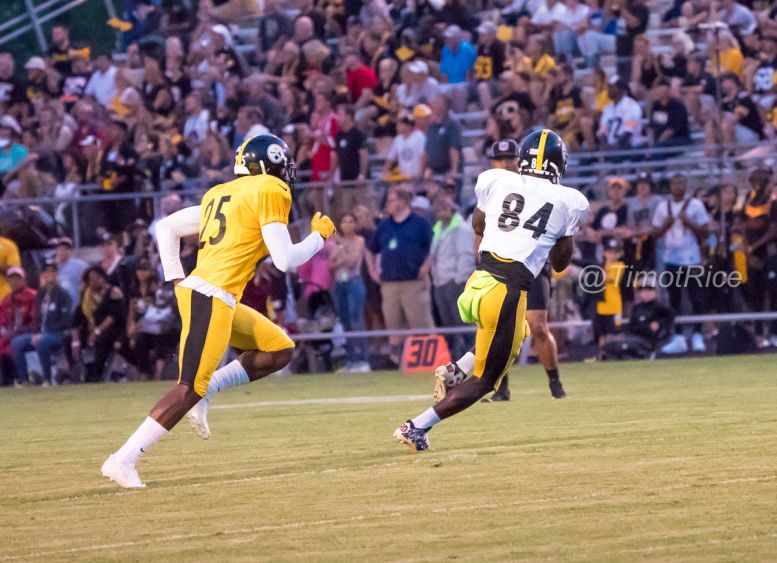 The good news is that when it comes to doing well against wide receivers in one-on-one coverage scenarios, Pittsburgh Steelers second-year cornerback Artie Burns has almost clearly been head and shoulders above the rest among his peers. That is what you would expect to see out of your first-round cornerback, after all.

The bad news, however, is the same as the good news, only worded differently. Burns is the only cornerback who has consistency excelled in this arena, and defensive coordinator Keith Butler is hoping to see more from the rest of his cornerbacks. Especially against Antonio Brown.

Speaking during practice a few days ago, Butler told reporters, “I want AB to be as good as he can because he’s going to doggone help us”, but “we’ve got to have somebody who can get close to covering him. Artie was probably our closest one, but we have to have more than one to do it”.

It’s worth noting that Burns missed some practice time and Ross Cockrell got his shot to shadow Brown, an opportunity that he asked for, and it did not go well. The whole thing got pretty high-profile, highlighted by Brown telling Burns, injured on the sideline after beating Cockrell one-on-one for a score, that it was too easy.

“They can’t let him win all the time. We have to win some of them”, the defensive coordinator said. “Artie was doing that. He was about 50-50 with him, I think, before he got hurt”. But he said for the others trying to cover Brown, “it’s an easy thing for him. He says it’s easy for him”.

“It pisses me off when he says it’s easy for him”, he said. “I like to be competitive”.

It should probably go without saying that the last thing as a defensive coordinator that you want to hear is an offensive player saying that playing against your defense is too easy, so getting pissed off certainly would seem to be a more than appropriate response.

Fortunately for Butler, only one team in the league has Antonio Brown, and he happens to be on that team. And having Burns to cover him, and any other wide receiver who would hope to rival him, will be critical for his defense this season.

Speaking of his ability to play press-man coverage, he said that “it means we can play different defenses, we can put a little bit of pressure on the quarterback. It’s not just going to be an easy throw-and-catch for the quarterback to pick it up and throw it outside, throw it inside against a zone defense or stuff like that. We’ve got to be able to change it up a little bit”.