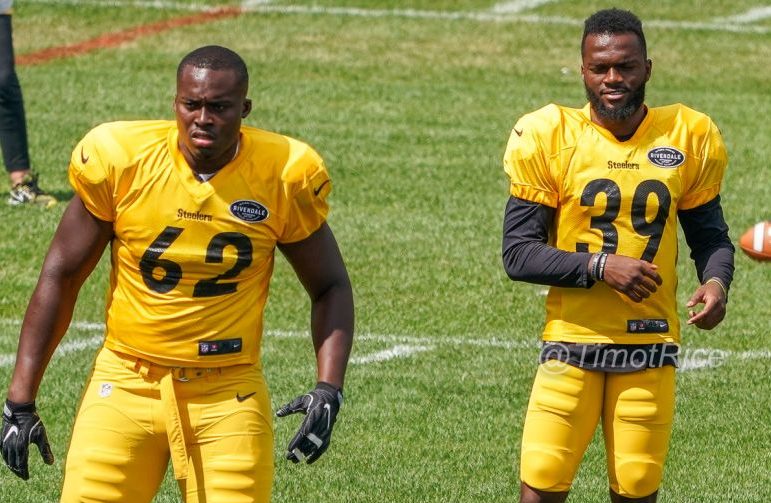 He’s a man who gets few reps in practice. Near the end of the roster. But he’s worth keeping around on the practice squad. Defensive end Francis Kallon is as raw as they come, and it shows on the field, but there’s intriguing upside and athleticism.

One play against the New York Giants stuck out for me. It didn’t come on defense. It was a kickoff. And no, Kallon wasn’t just one of the blockers.

He was running down kicks.

A 6’5, 295 pound (listed), defensive end sprinting 60 yards downfield. It’s not too often you see one of the big uglies doing that. But Kallon was downright graceful. Here he is running down the right hash, #62. in the third quarter.

Even check out that little rip move at the end to shed his block. Nice. That’s where a pass rush background helps on the coverage unit. Guys who know how to use their hands, work off blocks. Attack half man.

Of course, no one would ever expect Kallon, at any point in his career, to actually run down kicks. But it’s an example of his unique athleticism and the potential he might have. During practice, guys like Lavon Hooks and Roy Philon have gotten more reps. And frankly, looked better. Kallon isn’t even third team defensive end. He’s fourth team, a spot that barely exists, lucky if he can string together one or two reps during a 60+ play practice. Palling around with fellow UDFA Christian Brown, eager to soak up a rep.

But Kallon is the embodiment of what the ten man taxi squad. Guys who have potential but need time to develop. They’ve taken similar-story guys at other positions and made it work. Alejandro Villanueva is an obvious example but so is Brian Mihalik, who has stuck around after transitioning from playing defensive end in college and briefly in the NFL. Those were freaky-looking guys with a raw physical skillset. Like the line has in Mike Munchak, they have a great defensive line coach with John Mitchell. If there’s a coach who can make Kallon work, it’s Coach Mitch.

It’s what attracted the team to Daniel McCullers. Difference is, Kallon is a significantly better athlete.

Should it not work out, it’s still worth the risk. Worth finding out what you have after a year in an NFL system, an NFL weight room, with a focus solely on the game. Kallon was late to playing the game, not suiting up until his senior year of high school but immediately generating college interest. He’s a unique story, born in London, who didn’t get the reps in college to accelerate his development.

Let the Steelers take a stab at it. Guys like Kallon who can move as fluidly as he does don’t grow on trees.