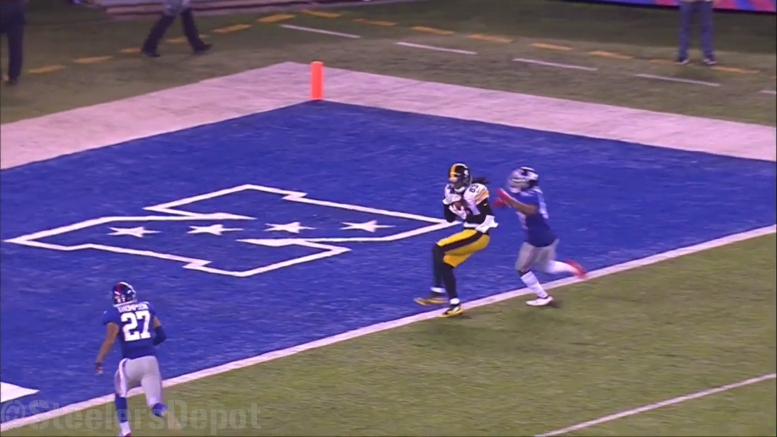 There will always be certain players over the course of the preseason who are in greater need of turning in a strong performance than others. It is the basic dynamic of competition, and of subjective evaluation. Rarely is anybody dead-even with another, and even in those improbable circumstances, other factors come into play.

But if there was one player who came into last night’s game with a desperate need for a quality showing for the Pittsburgh Steelers, it would have to be second-year wide receiver Cobi Hamilton, who looked as though he was set to very quickly fade into obscurity amidst a deep crop of wide receivers.

He was, however, afforded a very lucrative opportunity to perform last night due to the number of wide receivers who happened to be not participating in the affair for a variety of reasons. There was Antonio Brown at the top of the list, who was simply too valuable.

For Martavis Bryant, he had only just been cleared to practice two days earlier and was unable to prepare to play. Sammie Coates remains on the Physically Unable to Perform List recovering from minor knee surgery.

Meanwhile, Justin Hunter and Demarcus Ayers were shelved for the game for presumably minor but undisclosed ailments. The two had been missing practice lately. And over the course of the game—early on, in fact—rookie JuJu Smith-Schuster suffered a concussion that ended his evening far too early.

With all of those players not participating, the Steelers were short-staffed at wide receiver, which gave Hamilton a lot more opportunities than he would have otherwise. The only other wide receivers who were getting playing time were Eli Rogers, Darrius Heyward-Bey, Marcus Tucker, and Caanan Severin, so there was plenty of work to go around.

And while he may have only caught two passes, both of them were big, and both of them came on passes targeted down the field. About midway through the second quarter, he got behind the secondary on second and 16 to haul in a 44-yard pass for Joshua Dobbs.

Later in the quarter, after the Steelers managed to recover a fumble on a punt return attempt, the offense showed well in the quick turnover work with Dobbs hooking up over the head of the defensive back into the end zone for a 28-yard touchdown, the only touchdown pass for either side of the night.

Now, this performance is not going to suddenly put Hamilton inside the bubble for a spot on the 53-man roster, but it will save him for the time being from falling completely out of favor, and could learn to more opportunities in practice…perhaps even improved confidence, that will lead to better results.