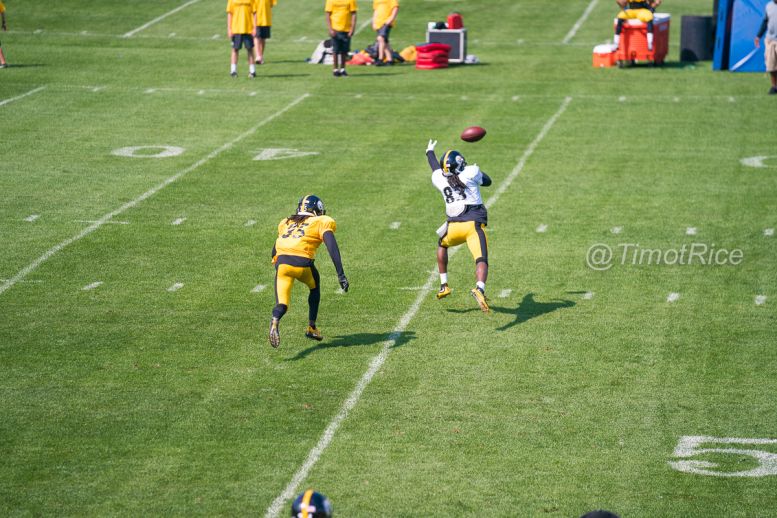 Now that the 2017 Pittsburgh Steelers training camp has concluded, we’re recapping everything that went down over these past 16 practices. We’ll break down each play, position-by-position, with final winners and losers at the end. Finishing up the offense with the wide receivers.

Antonio Brown: Brown looked a little mortal versus Artie Burns, though that’s really a compliment to the cornerback than a slight against AB. Brown still made superhuman catches few in the league can, including the best play of camp, a diving, twisting grab over his head in front of Burns down the left sideline. Our Tim Rice captured the moment. 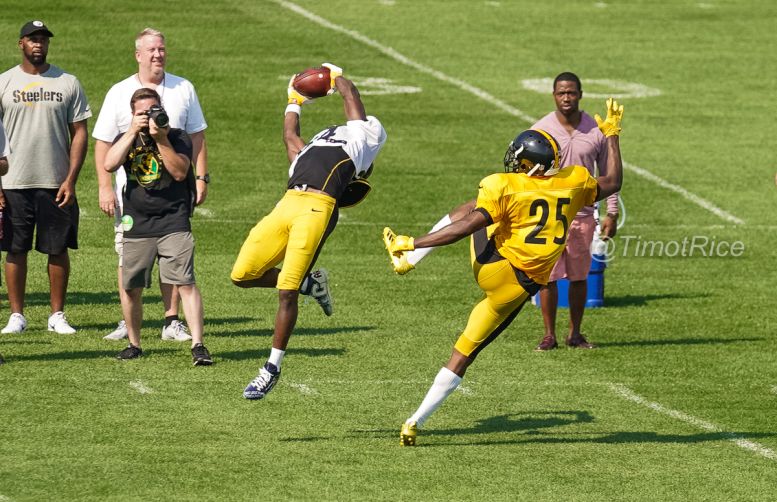 And when Burns wasn’t around or didn’t shadow him, Brown destroyed Ross Cockrell and Coty Sensabaugh. Brown is Georgia Tech, the others still Cumberland. Domination.

And I bet that challenge is good for Brown, though to a lesser degree than it is for Burns. Someone who actually made AB’s life tough is only going to improve his game.

Only disappointment was the four drops. Did like him getting more work out of the slot, something you should see continue in the regular season.

Justin Hunter: Hunter opened eyes early in camp by beginning as the starter opposite AB as the Steelers’ Z receiver. His second day of practice was strong and by the end of the first four days, he caught as many touchdown passes. But he faded from there, missing a few practices with minor injury, and failing to show consistency that has been fleeting his whole career.

Until Martavis Bryant stepped on the field, Hunter was the most physically gifted on the Steelers roster. And while there were moments of his play matching that talent, including a combative catch on Sensabaugh late in camp, But he ended things on the sourest of notes, a terrible Day 16, dropping two passes and seemingly inattentive. He didn’t catch a TD in seven shots over the final 12 practices.

There’s no question he has talent. But the devil is in the details, questions which remain as he exit camp.

Eli Rogers: There are days where Rogers isn’t very involved in the offense but when he is, he’s always productive and steady. He and Ben Roethlisberger seemed to grow and get on the same page as camp went on, critical for slot receivers. He has good hands, just one drop the whole camp, and is quick to the tuck to get upfield. You can also expect him to get work as a punt returner throughout the preseason, maybe the only guy who could push Antonio Brown off that spot since Demarcus Ayers hasn’t been able to get on the field.

While he isn’t a tremendously physically gifted, he sells his routes well. Able to influence corners with a vertical threat and the ability to so sink his hips and get out of his breaks without losing any speed. Does a great job of creating space at the top of his route.

Continue seeing growth in his game and his reps grew even more with JuJu Smith-Schuster missing chunks of time.

JuJu Smith-Schuster: While it’s frustrating he’s missed so much time, there is enough to go off of to give him a grade. When on the field, Smith-Schuster has been as impressive as you can hope for. A quick, dedicated learner with great hands, body control, and knack for finding the football in the air. Makes the difficult catches look easy. Clearly, his size makes him a willing and competent blocker.

Had it not been for injuries, three of them in total (sprained ankle, concussion, bone bruise in left knee), this would’ve been a great camp. But grading off what he did on the field only, it was excellent.

Cobi Hamilton: Hamilton salvaged a tough start to camp with a better – though still not great – end. He excelled in the New York Giants’ game, catching two passes and a touchdown, but still struggles to separate at the top of his break. His hands were a little disappointing too after being sure-handed last season.

In such a deep wide receiver room, it’s nearly impossible to think of a way he can make the roster. Still practice squad eligible but assuming they keep at least 6 on the 53 and Ayers on the PS, there’s no room for Hamilton.

Darrius Heyward-Bey: No question it was an awful camp for him. To be fair, as I’ve tried to preface everytime someone tells me he sucks, it’s not all his fault. He didn’t see much time with the 1’s, catching passes from Josh Dobbs and Bart Houston, whose completion rates on the whole were very low.

Still, he had five drops, didn’t make combative catches, and somehow finished the camp catching one pass on his final 18 targets. Never seen numbers quite this bad before.

The good news is his value is everything non-WR related. His leadership, special teams ability, work ethic, a favorite of Mike Tomlin, and the comfort he can play all three WR spots if you ever needed him to.

I think his spot is safe. But I’ve been wrong before.

Martavis Bryant/Sammie Coates/Demarcus Ayers: I am lumping all three of them together because they all get incomplete grades. Bryant picked it up quickly after a quiet first day and wound up catching three touchdowns on seven passes. The vertical threat he has been previously in his career was still evident.

Coates also had a quiet start, getting called out by Justin Hunter one day, but responded with a killer last two practices while Hunter wilted. Ayers didn’t get a lot of action his way when healthy and then an injury that’s still unknown to me that has kept him out the first two preseason games. For a guy whose path to the 53 comes in the return game, something that can only be accomplished in stadiums, it’s a big problem.

Marcus Tucker: Tucker has done well to hang around the team for two years now. He is more quick than fast with the ability to create space. As we noted in our camp stats, he increased his catch percentage up 20 points from last year to this year. That’s despite still having a couple of ugly drops and issue tracking the football downfield, sometimes turning his head too early and losing speed.

He has gotten work in the return game and I like what he did on the coverage units in the Giants game. Saw him get a few reps in the final practice in the slot, a position I thought he would thrive in but the Steelers haven’t shown much interest in.

Again, with the logjam at WR, he is going to have a tough time making the practice squad. Another year, with another team, he would’ve had good odds.