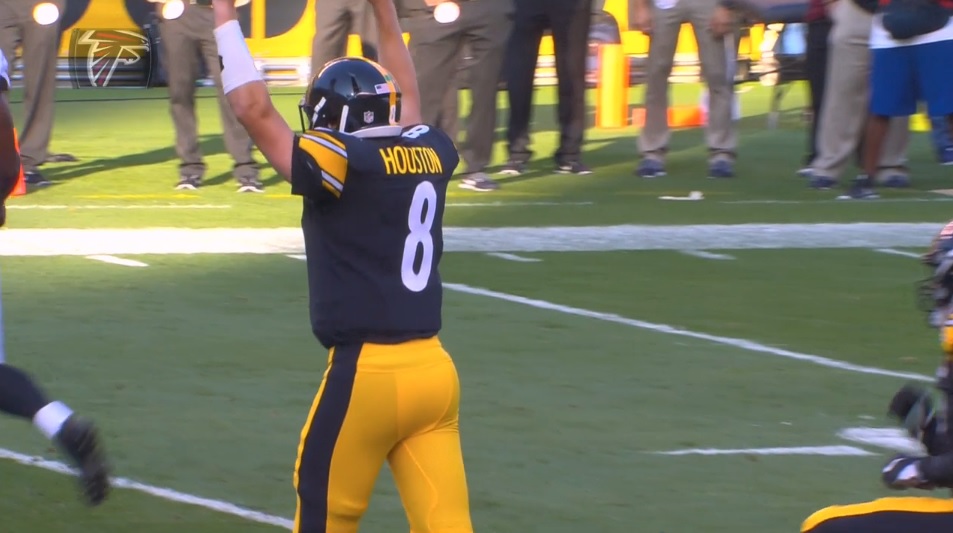 As usual, your winners and losers from the Pittsburgh Steelers 17-13 win over the Atlanta Falcons.

Jordan Berry:  For a long time, it felt like Berry was going to be the only bright spot of the day. While his average doesn’t look impressive on paper, seven of his eight punts landed inside the 20. His hangtime and directional punting looked fantastic as he builds on a successful 2016 season.

Stephon Tuitt: Tuitt was one of the few starters who played well. He finished the day with three tackles, two solo, but landed several hard hits and was a backfield nuisance throughout the first quarter.

Martavis Bryant: We are really basing this off one catch but man, it was a pretty one. Bryant caught a back shoulder fade from Josh Dobbs in the first half. He played a high amount of snaps, showing off improved conditioning, and is rounding back into form.

Roosevelt Nix: Nix cemented his path to making the Steelers with a preseason punt block against the Carolina Panthers. This time around meant a lot less to him but Nix’s halftime punt block served as a reminder to how good he is. His lead blocking wasn’t half-bad either.

Anthony Chickillo: A perennial camp star, Chickillo did his best Arthur Moats impression, recording two sacks against the Falcons. Though it was no surprise to see a veteran shine, it was good to see after he missed the preseason opener with a hip flexor injury.

Trey Williams: Maybe the guy who made the most money today. Or at least, a chance to reevaluate his practice squad chances. An undersized but shifty running back hindered by a hamstring injury in camp, Williams gave the Steelers the spark they needed, returning a punt 64 yards for a score in the third quarter. He made two defenders miss initially, darted upfield, and then cut back inside the five to carry the ball over the goal line.

L.T. Walton: Filling in for Javon Hargrave, Walton did well to hold the point of attack versus the run and managed to get some penetration on zone schemes. He’s clearly sitting pretty as the top backup at the nose. Bye bye Big Dan.

Jake McGee: All he does is block. But block he does well. He isn’t anything more than a below average athlete but has the ability to get out in space and set his hips. Big asset on those Counter Trey runs the Steelers love to utilize. Making a strong case to nab a practice squad spot.

Jordan Dangerfield: The man who gets no respect. Two interceptions in this one and a big thud on a special teams tackle. I’ll have to check the last time a Steeler picked off a pair in a preseason game.

Josh Dobbs: Again, better days are ahead and while Dobbs has had the unique chance to start both games, it’s also come against first team NFL defenses. That’s clearly difficult. While drops from guys like James Conner did him no favors, Dobbs’ accuracy on short/intermediate routes were again an issue. At least twice did he whiff on a slant. Later in the game, against backups, he made the boneheaded decision of trying to flip the ball underhanded to McGee, picked off by a safety.

He finished the day just 10/19 for 70 yards and the interception.

Matt Feiler: Feiler earned the start for Ramon Foster and though it’s hard to gauge a linemen’s performance the first time through, it looked shaky. He gave up an early sack on a missed stunt to DT Grady Jarrett, a product of not getting work with Alejandro Villanueva. I think he got better as the game progressed but an ugly start.

Secondary/Golden/Cockrell: The elephant in the room. Though I think some fans would content an elephant would’ve covered better. You can apply this to the whole secondary or focus in on Ross Cockrell and Robert Golden, the two biggest victims of the Falcons’ passing attack. Cockrell got toasted downfield and Atlanta threw dig after dig Golden’s way with little resistance.

Cobi Hamilton: I guess you could argue Hamilton wasn’t needed with the Steelers wanting to get a long look at Justin Hunter and Sammie Coates but Marcus Tucker played over him, a big red flag for Hamilton’s chances. He didn’t see the field on offense until there were about two minutes left in the game.